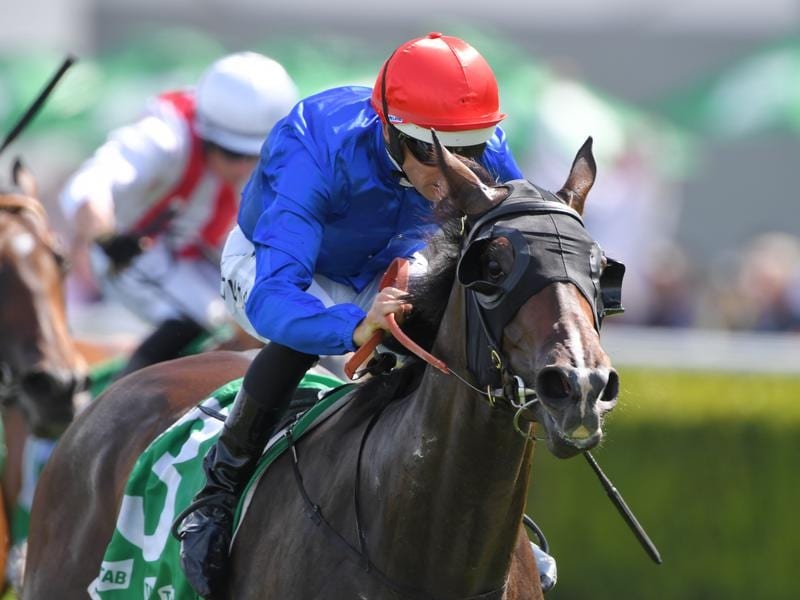 Godolphin has made a sweep of the Group Two Light Fingers Stakes placings at Randwick.

Blinkers have proven to be a masterstroke for Godolphin filly Flit, who has claimed several high-profile scalps to win the Group Two Light Fingers Stakes at Randwick.

Libertini was sent out an odds-on favourite but disappointed, finishing a well-beaten fifth.

Cummings said he and jockey Hugh Bowman had been discussing adding blinkers to Flit for some time to help her focus.

“We left them off and she won the Group One (Thousand Guineas) but then she was a little keen in the 2000-metre (fourth, Wakeful Stakes) so she is probably a little speedy for distances like that,” Cummings said.

“But the way she returned and trialled against the older horses, she was getting to the line well but she couldn’t afford to lose her focus for 50 metres when the pressure went on.

“With the blinkers on she was able to apply herself and show the promise we have been getting from her over the last 12 months.

“I dare say she is the filly to beat in two weeks (Surround Stakes).”

Bowman camped Flit behind the speed form an inside gate and said blinkers and a rails draw aided her in Saturday’s 1200-metre race.

He had been anxious about how she would cope with a wet track but Flit quickly dispelled his concerns when she let down.

“I think the blinkers have really helped, especially over these distances. It really switched her on,” Bowman said.

“Even in the Thousand Guineas, when she went from travelling tto through her gears, she just didn’t do that well without the headgear.

“I didn’t think she was all that comfortable on the soft ground in the trial so to just switch on and perform like that on that ground, it is so encouraging and her work through the line was just as good.”

Cummings was also rapt with the return of Golden Slipper winner Kiamichi, who sweated up pre-race but fought on well.

“It is the first time she has disappointed and we just have to get her home and have a good look at her,” Cummings said.