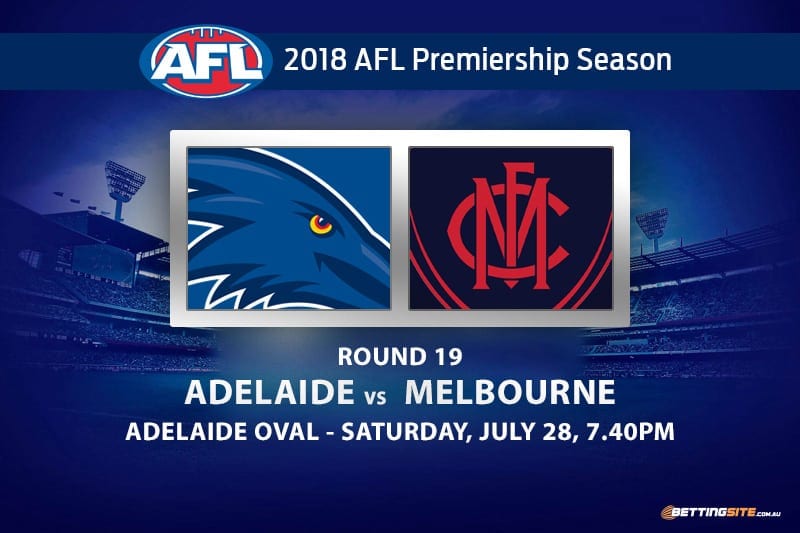 We’ve got another season-defining match on our hands on Saturday night.

At the Adelaide Oval it will be the Crows who host the Melbourne Demons with September action on the line.

Melbourne losing after the siren last week was a heart-breaker in every sense of the word. The Demons were simply the better team for the whole night, but failed to defend one last attack from the Cats, who stole the game right out from under the Melbourne’s nose.

Adelaide held off an in-form Brisbane in a match that could have been won by either side. When the final siren blew it was the Crows who led, keeping their slim finals hopes alive for another week.

Earlier in the season, Melbourne beat Adelaide by one of the biggest margins to date. A massive 91-point margin sent the Crows home with their pants pulled down.

This match will be a far greater contest as the Crows, with gun players back from injury, are back to something close to their best form, while the Demons will be desperate to get the job done on hostile territory.

Here are our tips for the Saturday night clash between the Crows and the Demons.

Bryce Gibbs has slotted into the Adelaide midfield group without missing a beat. So far this season Gibbs averages 26 touches per match, which is very high when compared to the best players in the competition. As the third best ball winner at the club, he is often free to roam the ground without a tag.

The Hawthorn and Melbourne champion will play his 300th game on the weekend, solidifying him into a heralded club. As a big game player, Jordan enjoys the heat of the contest and we’re tipping he’ll enjoy this one. This week against the Crows, Jordan will have his go in the midfield if needed, but mainly accumulate plenty of the ball across half back, as he has done all season.

The Crows have a great forward line, but it has shown weaknesses over the last fortnight. Mitch McGovern will be lucky to hold his spot after not impacting the match until the third quarter last week. The team will need to be at their best if they are to beat the Demons this week, which means the forward line will be working very well. Taylor Walker will be back and should make a solid impact against the Dees.

The way Melbourne kicked last week was deplorable and cost them the match. If they do that again this week when they face the Crows, they can kiss the four points goodbye. We think a tighter Adelaide backline and intense conditions will keep the Dees under 81.5.

Adelaide Crows vs. Melbourne Demons Round 19 – First to Tip

The home field advantage rarely goes underestimated in today’s game. Not only does the venue matter, by judging from previous form, the Crows have been better at creating an early lead, which makes them our tip in the first to 50 market.

Adelaide have the capacity to beat any side on a good day and we suspect they’ll get the job done in this match. Adelaide to win by a fairly strong margin and charge towards September football.