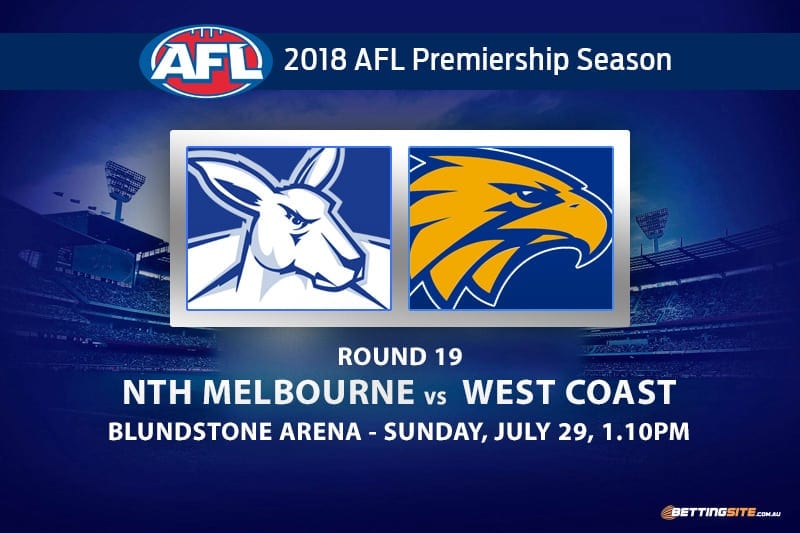 Heading down to Tasmania’s Blundstone Arena is one of the toughest trips in footy.

This Sunday, it will be the West Coast Eagles who will take on the desperate North Melbourne Kangaroos.

The last three matches played between these sides have all been won by the Eagles, with the margin progressively increasing on each occasion — the most recent match exceeding seven goals.

The battle of the keys forwards will be one to watch, as Ben Brown and Josh Kennedy will be kicking goals all day. Both play crucial roles to their side and without them, their teams would not be as high on the ladder as they currently sit.

The teams have not been confirmed as of yet, but the inclusion of Tom Barrass is a great sign for Eagles fans and players alike. Barrass plays a role similar to Jeremy McGovern, which allows the two of them to split their loads equally throughout the match. This will make the match much easier for the Eagles as they will need to lock down Ben Brown and Mason Wood.

The punters are giving the Eagles the shorter odds on this occasion, but only by a slim $1.77 to the Roos $2.10. Not only will this match be close, the unpredictability of both sides make it impossible to tip.

Here are the tips we have identified for the match:

Jed Anderson is a very talented player that has shown his worth this season for the Roos. The Hawks let Anderson go back in 2015, and since debuting for the Roos in 2016, Jed hasn’t had the easiest of times. Putting all the injuries behind him this season has seen his career rejuvenated. Jed averages his highest disposals per week of his career with just under 19 per match. This season has also been good in front of the goals for Jed, as he has kicked six goals in the 16 games he has played. This week he will get forward and slot one against the Eagles defenders, who may underestimate Jed’s speed.

While the attention will be on Ben Brown and Josh Kennedy, Jack Darling is likely to go under the North Melbourne guard. The Roos defenders are quite talented, but if the Eagles get off to a great start, they’ll begin to crack. We think Darling will benefit from the attention paid to his forward teammate and kick a minimum of three goals.

Blundstone Arena is famous for the winds it can produce during its matches. When the wind picks up, it can go straight down the field, making ball-use faster and causing havoc for defenders. Even without wind, the high scoring style that both the Roos and Eagles play, will cause this match to be a high-scoring affair.

With the best forward line in the comp, it is hard to see the Eagles not kicking over 86.5-points. The combination of smalls and talls works well for them and they love to kick goals. They are currently the fourth highest scoring side in the competition and with this knowledge in mind, it is clear that they Eagles will kick a high total against the Roos.

When playing at the home field that has become a fortress for the Roos, they have a very good track record when it comes to starting off matches. The Eagles will take a few quarters to truly warm up and begin to dominate the Roos. The Kangaroos will lead the first half and be ahead at half time, before the Eagles run home better and take out the match.

The Eagles are not the second-placed side for no reason. Sitting equal with the Tigers, they need to win as many matches as possible in an attempt to overtake their top spot. Go with the line as the game is a chance to blowout if the Eagles can get going early.