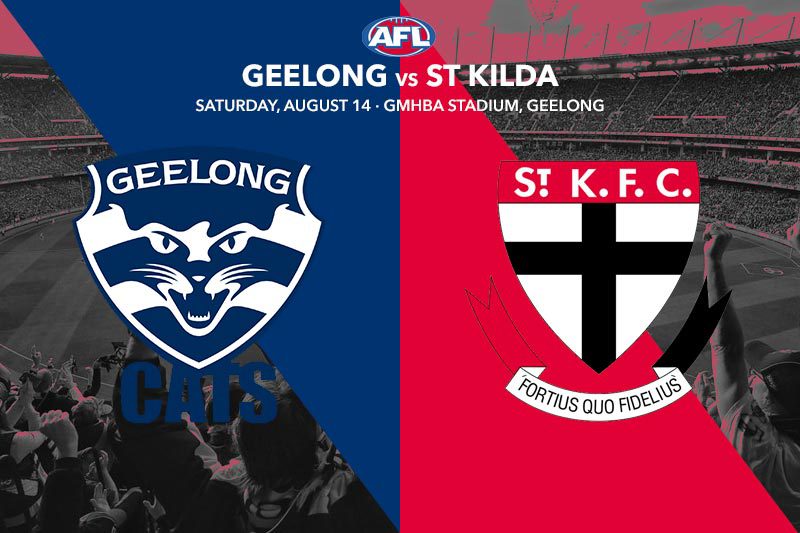 It is now or never for the St Kilda Saints, who must win this round 22 clash with the Cats in Geelong on Saturday afternoon to keep their AFL finals hopes alive.

Chris Scott’s Cats currently sit third on the ladder with two rounds left to play, while the Saints’ massive upset win over the Swans in round 21 puts them within reaching distance of the top eight.

Patrick Dangerfield has been given the all-clear to play this Saturday after being subbed out in Geelong’s loss last week, while Jeremy Cameron has put his hand up for selection after missing the last six weeks with a hamstring injury.

Forgotten Saints veteran Dan Hannebery has finally made a return to full fitness and will play this weekend, adding some much-needed experience to the St Kilda midfield group. Max King (groin) is still under an injury cloud and will more than likely miss out this Saturday.

Although the Cats won their round nine match against St Kilda by 21 points, the contest could have gone either way. The Saints simply could not convert their chances, kicking 5.17 despite taking 14 marks inside 50. The Saints are in a bit of form, so the straight-shooting Cats will need to be on their game.

The Cats love to share the ball in the middle and carefully navigate around the ground, which rewards their hardest runners with plenty of disposals. Mitch Duncan usually dominates the Saints, but he has been sidelined with a knee injury since round 15. Zach Tuohy also has a great record against the Saints and has stepped up in the absence of Duncan, making him an excellent choice to get 25 or more disposals this week.

Two of the toughest midfielders on the ground will go head-to-head this Saturday when Cameron Guthrie and Jack Steele collide. Both players have been fantastic this season, using their strong frames to tackle hard in the middle and win plenty of the footy.

Steele has added a cutting edge to his game this year, pushing forward and kicking goals on a regular basis. The St Kilda skipper put one through the middle against the Cats earlier this year, and we like the $2.10 at Sportsbet for him to kick a goal this Saturday against the Cats.

The Cats were outworked by the GWS Giants last week, but we expect the premiership contenders will bounce back against the Saints. The inclusion of Jeremy Cameron has come at the right time for Geelong, as St Kilda key defender Dougal Howard is still sidelined with a hamstring injury. We do not think the Saints will last another week in the finals race, but they can make it a tight contest at Kardinia Park.

Zach Tuohy to get 25+ disposals

Zach Tuohy’s season-high for disposals in a game this season is 31, which was against the Saints back in round nine. While that number is padded with kickouts due to St Kilda’s inaccuracy on the night, it must be noted that the Irishman has passed 25 touches against the Saints three times since joining Geelong before the 2017 season. We think the defender-turned-wingman will get off the chain this Saturday and collect 25 or more disposals for the 11th time this season.

We cannot go past the Cats on their home deck down at Kardinia Park, where they have not lost to the Saints since 1999. Zach Tuohy will dominate on the wing and record another 25-disposal match, while the St Kilda captain will hit the scoreboard once again.