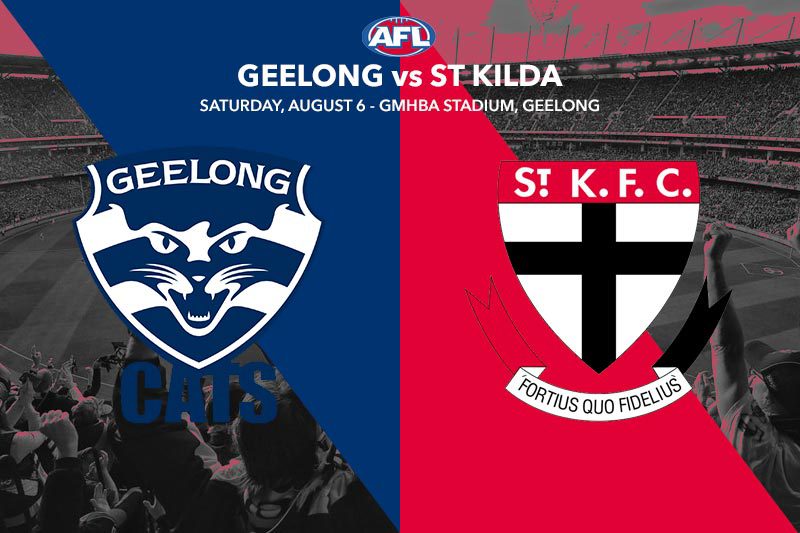 Can the Saints keep their season alive when they face the imperious Cats at GMHBA Stadium this Saturday in round 21 of the 2022 AFL season?

Geelong continued their ominous form in round 20 with an overwhelming defeat of the Bulldogs by 28 points. The Dogs came out hot, running up a big first-quarter lead, but the Cats steadied, adapted, and produced an intensity that could not be matched. The Cats are deserved premiership favourites at this point and now sit alone at the top of the ladder.

Other finals contenders will be watching Geelong closely for potential chinks in their armour, but they look to have the right blend of youth and experience. The Cats have now won 10 games on the trot with their last loss coming at the hands of the Saints at Marvel Stadium in round nine.

The Saints kept their season alive with a scratchy 12-point win over the Hawks, and cling to a top-eight position. With the Tigers and Bulldogs breathing down their neck, the Saints will need to keep winning if they are to play finals. St Kilda have an inferior percentage to their major rivals, and we expect them to fall short of September action.

However, hope springs eternal in the sporting world, and there is a slim chance that the Saints get lucky, their opponents lose, and they make a surprising finals run. Not many pundits had that outcome pencilled in pre-season, so they have already defied expectations. St Kilda have a poor record at GMHBA Stadium, having lost their last 10 games at the cattery.

Geelong key forward Jeremy Cameron currently sits second on the Coleman Medal ladder having accumulated 54 goals at an average of 2.8 per game for the season thus far. Cameron also has a Lance Franklin-style liking for drifting up the ground to grab a mark at half-forward and averages an impressive 16.1 disposals per game. Cameron and Tom Hawkins both understand the value of their small forwards and set up plenty of goals for the crumbers.

Saints key forward Max King sits fifth on the Coleman ladder with a haul of 48 goals. It’s easy to forget that King is only 22 years old and still learning his craft. King averages an inferior 10.8 disposals per game and tends to go missing on occasion when quality ball is not being delivered to his zone. He also lacks an elite tall-forward partner, so one suspects he will have to play a big game to offset the threat at the other end.

Geelong are predictably short here, and the line is set at a solid 33.5 points. The Cats rarely lose at home, and the Saints would need to produce a superhuman performance to leave with the spoils. The worrying aspect for Saints supporters is their tendency to kick totals under 70 points – rarely a winning score. Geelong’s defence has been rock solid in recent weeks, and the Saints might struggle to get past 50 points here. That said, we are backing the Cats by 1-39 and hoping the Saints don’t get blown off the park. Showers are predicted, and the Cats might run up a lead and slip into cruise mode.

For the value junkies, we are combining Geelong 1-39, into Tyson Stengle 2+ goals, into Isaac Smith 20+ disposals. This triple-header will return an attractive $6.63 courtesy of Ladbrokes.