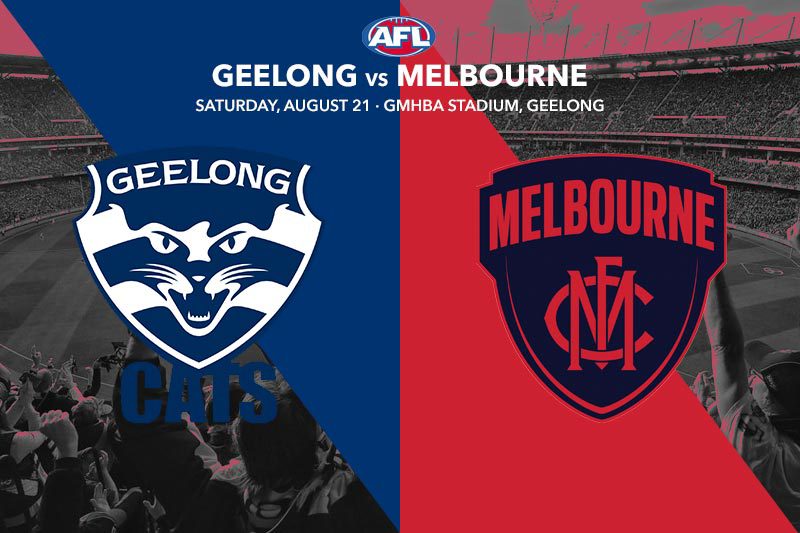 Round 23’s Saturday night clash between Geelong and Melbourne at GMHBA Stadium could be one of the best games of the 2021 AFL Premiership season.

It is always a spectacle when the top two meet in the last round before the finals, but especially when the minor flag is still up for grabs.

Simon Goodwin will welcome back three important members of the Demons’ spine, as Tom McDonald, Steven May and Jack Viney should be fit to return this weekend.

Gary Rohan missed Geelong’s 14-point win over the Saints last week with a hip issue, but the blistering forward is expected to reclaim his place in the 22 on Saturday night.

The Demons have won each of their last three matches and sit two points clear atop the AFL ladder, but the Cats can steal the minor premiership if they win this clash and Port Adelaide don’t do enough against the Western Bulldogs on Friday night.

The Demons and Cats sit first and second in the AFL for defence, both conceding an average of just 65 points per game. Tom Stewart has been the leader of Geelong’s back six, but his season-ending foot injury has forced a reshuffle that sees the likes of Sam Simpson and Zach Guthrie playing more minutes.

The two premiership favourites clashed back in round four, when Melbourne won by 25 points at the MCG. The Dees have not beaten Geelong away from home since 2015, having lost their most recent bout at Kardinia Park by 80 points. The Demons will put up a much better performance this time around in what should a close encounter.

There is no stopping an in-form Patrick Dangerfield, and the same can be said for Christian Petracca these days. Dangerfield was awesome against the Saints last week with 31 disposals and a goal, while Petracca posted 23 touches and two majors against the Crows. Petracca was unstoppable against Geelong earlier this year, collecting 36 disposals and kicking two goals in a clear best-on-ground performance, so the Cats will need to find an answer for him if they want to win this one.

The Cats have the capacity to replace two-time All-Australian defender Tom Stewart, which gives us enough confidence to back them in against the Demons this Saturday. Although there will be no fans at GMHBA Stadium, the Cats still have an advantage on their unique home deck. The Dees are strong, but we are backing Jeremy Cameron and Tom Hawkins to outclass Jake Lever and Steven May.

Isaac Smith has been very productive since arriving at Kardinia Park this season, averaging over 20 disposals per game while slotting a very handy 13 goals. One of Smith’s best games of the year came against the Demons back in round four, when he slotted two goals in a loss at the MCG. The veteran wingman has been accurate in front of the big sticks this season, and we like him to hit the scoreboard this Saturday night.

We see the Cats winning in an arm-wrestle, with their advantage at GMHBA Stadium proving the difference. Isaac Smith is a good chance to kick a goal or two, while Christian Petracca will be at his best in the middle.