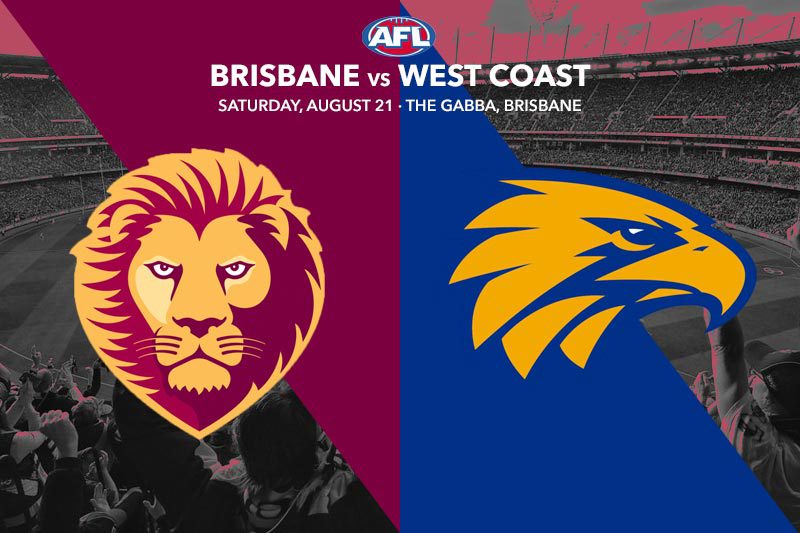 There are no more second chances for the West Coast Eagles, who face a tough test against the Brisbane Lions at the Gabba this Saturday in round 23 of the 2021 AFL Premiership season.

Adam Simpson’s men must win this contest in order to keep their finals hopes alive, as three consecutive losses have seen them slip outside the top eight at just the wrong time.

A spot in the top four will still be available to the Lions if the Western Bulldogs lose to Port Adelaide on Friday night, so both sides have plenty to play for.

The Eagles could make up to four changes to cover a handful of injured stars. Tim Kelly (knee) and Brad Sheppard (concussion) are confirmed casualties, while Josh Kennedy (finger) and Jeremy McGovern (hip) will need to prove their fitness during the week.

Two senior Lions will be eying a return for this crunch clash, with Marcus Adams and Mitch Robinson pushing to regain their spots before the AFL finals begin.

The Brisbane Lions appear to have hit their stride at just the right time, beating the Dockers and Magpies by a combined 149 points over the past fortnight. Chris Fagan’s men were elite out of the middle against Collingwood, kicking a season-high six goals from centre bounces.

In stark contrast, West Coast’s tough loss to Fremantle was just the latest disappointment in a most untimely form slump. The Eagles have gone from a near-certainty for finals to a long shot in the space of three rounds, and their cause has not been helped by a wave of injuries to some of their most valuable players.

One of the biggest beneficiaries of the Lions’ midfield dominance last weekend was Joe Daniher, who took a game-high eight marks and kicked three goals. The key forward has run into some serious form over the past few weeks and could have a day out against the Eagles if Jeremy McGovern is absent or plays sore.

Jarryd Lyons is enjoying a career-best season and has been a huge factor in Brisbane’s recent dominance in the middle. Elliot Yeo has taken some time to find his feet after a lengthy spell on the sidelines, but he is now showing glimpses of the form that made him such an important part of West Coast’s 2018 premiership team. If Yeo can get on top of Lyons around the stoppages, or at least make it a fair-dinkum contest, the Eagles might just stand a chance.

Considering the Lions have won their last two matches by an average of 75 points, we have no qualms taking them at the line in this contest. The last time they left Perth, the Eagles lost to the Magpies by 45 points. Brisbane should notch up another big victory at the Gabba this Saturday and charge into the finals with momentum.

Joe Daniher was on fire in Brisbane’s huge victory over the Magpies last week, kicking three goals and setting up two others. The former Bomber is the only player in the AFL who has kicked a goal in every game this season, including 14 majors in his last five outings. Daniher kicked a bag of five goals in his last full-length game against the Eagles, and we could see something similar this Saturday.

Joe Daniher will be lively up forward this weekend as the Lions put a resounding full-stop on West Coast’s season. Elliot Yeo will lead the way for the visitors in the middle, but it will not be enough to stop the in-form Brisbane at the Gabba.