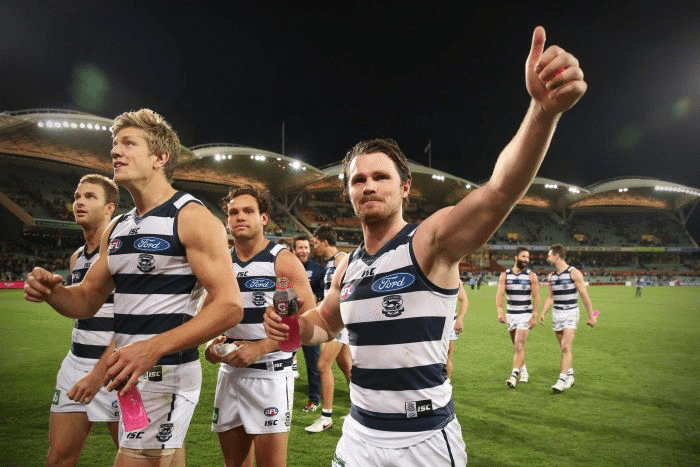 GEELONG is the lone $4.25 favourite for the 2016 premiership at Sportsbet.com.au after its sensational 57-point win over the Western Bulldogs on Saturday night.

The Cats are the shortest priced team to win the flag this year after their strong victory over the fellow top-four aspirant.

The win moved the Cats ahead of league leaders North Melbourne, which also places them as the even-money favourites to win the minor premiership at $2.

If having a stranglehold on the premiership market was not enough, Patrick Dangerfield has again firmed in the Brownlow betting market, coming into an incredible $2.25 to win his maiden league best and fairest award.

Just to further underline how brilliant the pairing of Dangerfield and the Cats have been, the $9 on offer from Sportsbet for a Dangerfield Brownlow/Cats premiership is equal or better than the premiership odds of 13 teams this season.

Cats’ coach Chris Scott said his team are well-placed to win their second premiership under his reign.

“We’re optimistic about what’s possible. We’re not trying to undersell ourselves.

“The last three weeks have shown our best footy is pretty good.

“It’s really irrelevant how you’re going now. We’ll work really hard to make sure we’re playing our best footy towards the end of the year.

“As things stand at the moment, I’d give us a chance.”

The Cats next play on Saturday night, where they will be the $1.18 favourites in their game at Etihad Stadium against St Kilda.

While the Cats are the clear-cut favourites at the head of betting, there is a veritable logjam underneath them.

Hawthorn, Sydney and Greater Western Sydney are all at the $6 premiership quote after all three teams recorded wins in round 13.

DESPITE losing to Fremantle in a must-win game on Saturday, Port Adelaide remain the only team outside the eight in single figures to make the 2016 finals series at $9.

Port led by a goal midway through the third quarter, but lost control of the match thereafter to lose to a team which won just their third match of the season.

Port Adelaide coach Ken Hinkley blasted his team in his post-match press conference, going as far as to suggest his team did not take the game seriously enough.

“Early in the game it felt like we didn’t really want to win almost,” Hinkley said.

“That was just the mindset of the players out there was that they were spooked by it all.

“That was a really poor performance particularly off the back of what we’ve been able to deliver.

“We just didn’t work hard enough in the game for long enough and Fremantle did.

“It was like Fremantle were 6-6 and the roles were reversed.”

Port Adelaide now enter its bye week two games and 19 percentage points worse off than cross-town rivals and eighth-placed Adelaide, which will enter Thursday night’s clash against North Melbourne as the $1.43 favourites to consolidate its place in the finals.

An Adelaide victory on Thursday night would almost certainly end Port’s finals hopes, but if the Kangaroos can cause an upset, the Power will be hopeful a mid-season revival can occur.

Three of the next four games for the Power are at home, but they face stiff opposition in Hawthorn and North Melbourne across that month of football.

THE battle to avoid the wooden spoon looks set to be a two-horse race between the Dons and the Lions in the eyes of Sportsbet.com.au.

Both teams have only recorded one win for the season, but it is the Bombers who are the $1.42 favourites to finish the season with the least amount of wins.

Just 4.7 in percentage separates Essendon and Brisbane at the tail end of the competition, and the round 18 clash at Etihad Stadium between the two teams could be the game which decides who has the indignity of finishing on the bottom of the ladder.

Despite being favoured to finish above the Dons in 2016, Brisbane captain Tom Rockliff said in the aftermath of their heavy 49-point home defeat against the Eagles that his side is not ‘AFL standard’.

“Yesterday I think was a step in the right direction but you still walk away with an eight-goal loss, which is not AFL standard,” Rockliff said.

“We know where we are at. We have to be patient but in saying that, you’ve got to work hard and continue to improve as a team.

“That’s what the members and supporters want. They want to see improvement in our team and unfortunately the last sort of month we’ve let ourselves down with games where we’ve gone out there and performed really poorly.”

Brisbane face a tough road match-up against the Tigers on Saturday night where it will go in as $6.50 outsiders.

Essendon has the bye.

ONLINE bookmaker Sportsbet.com.au has opened a market on the maiden Women’s AFL League.

The Melbourne Demons are the $4.50 favourites to win the flag after involvement in the women’s competition for the last two years, while the Western Bulldogs are on the second line of betting at $5.

No team is in double figures to win the 2017 Women’s AFL premiership.