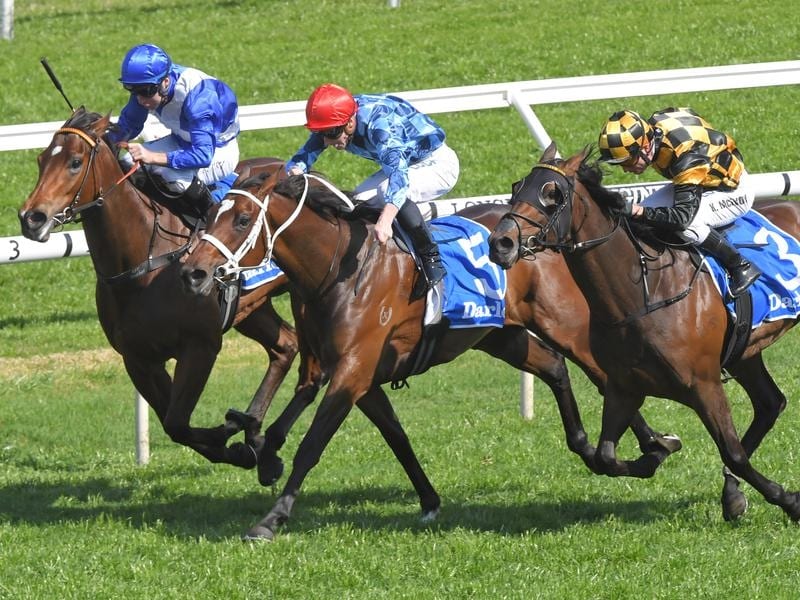 Funstar (centre) has won a thrilling Tea Rose Stakes, edging out Probabeel (outside) and Libertini.

Libertini has had her colours lowered for the first time as a three-year-old but has gone down fighting in a three-way finish to the Tea Rose Stakes with Funstar on top.

The margins were a nose and a short head and although satisfied with Libertini, trainer Anthony Cummings admitted it puts the Flight Stakes into doubt.

“I just think the other two are going to be much better at the mile than what Libertini is going to be,” Cummings said.

“They’re three quality fillies, they’ve all got good records and Libertini has only added to hers today.”

“The three options were to go to the mile, an option became The Everest which is least likely, the Coolmore was another that sits there looking at us, or the paddock.”

Funstar’s trainer Chris Waller has no doubt the half-sister to Oaks winner Youngstar will be better at the 1600m of the Flight Stakes.

“We’ve said all along she’s got all the right attributes to be a decent horse and I think when she gets over a little bit further she’ll even get better, and that will be the mile in the Flight Stakes in two weeks time,” he said.

“Breeding comes through in horses and when she’s a sister to Youngstar by Adelaide. I’ve got a lot of confidence.

Probabeel’s trainer Jamie Richards is equally confident she will improve over further.

“She’s just crying out for a mile. It was a really good run,” Richards said.

“There’s a possibility for sure. We’ll take each run as it comes.”

The three were more than 2-1/2 lengths in front of fourth placed Emerald.

“She did a lot wrong today,” he said.

“The speed was against us through the middle stages when they pulled to a walk.

“She got over-racing and I was just lucky that I was on a very, very good filly.

“I was surprised at the lack of tempo and I was more surprised that she still won because she wasn’t entitled to.”

Tommy Berry said Libertini failed to handle the distance and did well to fight out the finish,.

“She was beaten at the 100 and I thought James was going to go straight past us but you don’t find many horses that try as hard as her,” he said,