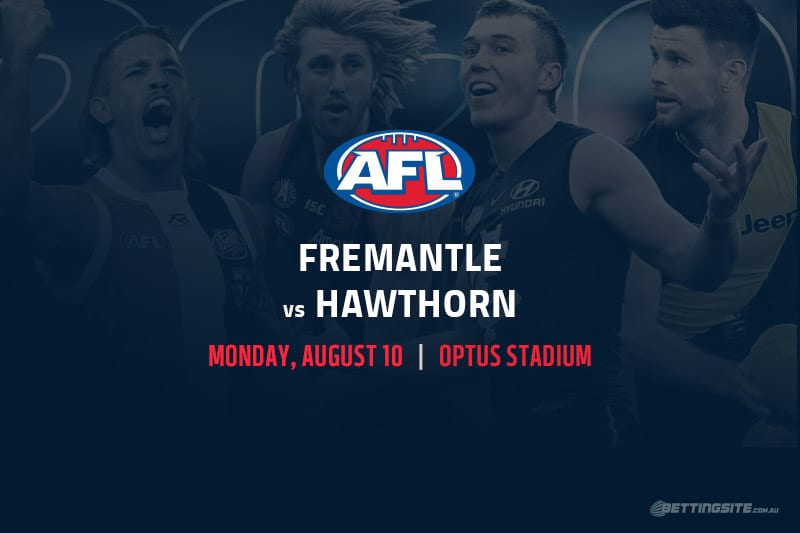 Both the Fremantle Dockers and Hawthorn Hawks will look to secure back-to-back wins either side of the bye when they face off at Optus Stadium on Monday night.

Take nothing away from the Dockers regarding their recent win over Collingwood, as Freo played without Michael Walters and still managed to defeat a team many had tipped to contend for the premiership this year.

The return of Luke Breust, Tim O’Brien, Jon Ceglar and Jarman Impey made an enormous difference for the Hawks, who came from a long way back to run over the top of Carlton in round nine.

James Aish, Stephen Hill and Jesse Hogan could return for the Dockers if they prove their fitness, while Shaun Burgoyne is likely to sit out for Hawthorn with hamstring tightness.

After starring with 22 disposals and a Rising Star nomination in the loss to Geelong, Caleb Serong followed up with 24 touches and six coaches’ votes against Collingwood’s powerful midfield. Last year’s no.8 draft pick is second in the 2020 AFL Rising Star betting market at $3.50, behind $2.25 favourite Izak Rankine.

Tom Mitchell and Jaeger O’Meara have found form in the past couple of weeks, but James Worpel is also doing his part for the team. He was good in the win over the Blues and looks a great pick for this clash, as he had 33 disposals against the Dockers last season. The absence of Michael Walters will hinder Freo in the middle, where Worpel should thrive.

Rory Lobb has become a weapon in the forward half for Freo, as he knows how to take a contested mark and has worked on his set shots. Lobb has kicked seven goals this year, including three games with two majors, while he also kicked a season-high three goals against the Hawks back in 2018.

After missing five weeks with a jaw injury, Luke Breust returned against the Blues and made an immediate impact with two goals from 12 touches. The gifted forward’s recent record against Fremantle is particularly impressive, as he has 12 goals and one behind from his last four games against the Dockers.

Either team by under 15.5 points

Horrendous conditions are expected in Perth this week, which should give the game a tough edge that will invite more contests and less scoring. We already expected this would be a close contest, as both teams are coming off wins and have been hard to pick apart in the past, but the forecast makes us even more confident in a tight match.

The forward combination of Chad Wingard, Luke Breust and Jack Gunston worked beautifully for Hawthorn last week, and we think they can back it up after the bye. The Dockers were well and truly outplayed by Geelong in the wet in round eight, so there are doubts as to whether they can handle the conditions forecasted for Monday night.