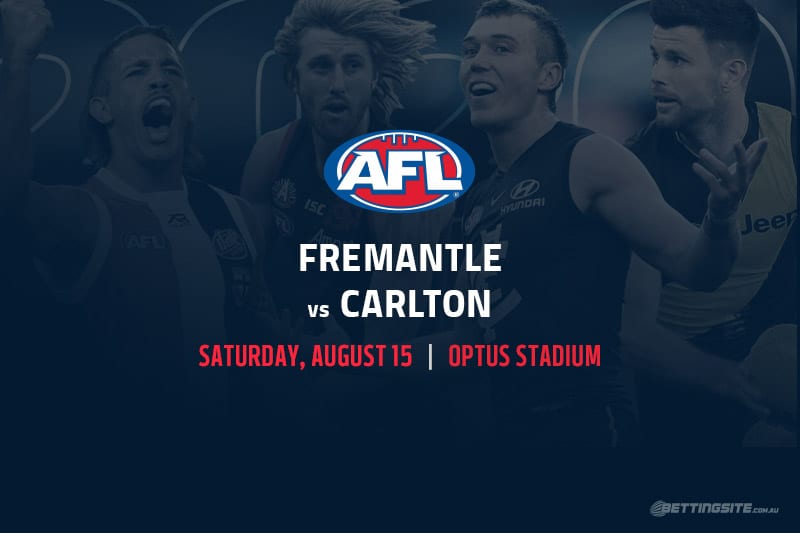 It’s now or never for the Fremantle Dockers and Carlton Blues if they want a top-eight spot in this wild 2020 AFL Premiership season.

The Dockers beat Collingwood and Hawthorn in consecutive games as outsiders at Optus Stadium, and they will start at the longer odds again this weekend despite the home advantage.

The Blues have lost their last two games, but coach David Teague will have taken plenty of positives out of their performance against the West Coast Eagles last Sunday.

Michael Walters has missed a couple of matches with a hamstring issue, but the Freo star has trained very well during the week and looks ready to return in place of the injured Travis Colyer.

Carlton’s prized recruit Jack Martin has been ruled out for the near future with a calf injury, while former no.3 draft pick Paddy Dow could make his first appearance since round one.

The Fremantle midfield has been very strong without Michael Walters, as Andrew Brayshaw, Caleb Serong and Adam Cerra have stood up like veterans. Cerra has always been a clean player that uses the ball wisely, but his 26-touch game against the Hawks showcased his ability to find the footy. Cerra has struggled against the Blues in the past, but we cannot ignore his excellent form.

Last time the Blues and Dockers met was a belting contest where Carlton came from five goals down in the first quarter to win the game. Sam Walsh was one of Carlton’s best in that comeback, racking up 30 disposals for the day. Walsh’s numbers have been up and down in 2020, but we are backing him to have another big one against Freo this weekend.

He may not be the most imposing player inside 50 for the Dockers, but Lachie Schultz is immensely talented and knows how to kick goals. With seven majors this season, including two against the tight Collingwood defence, Schultz is a lively small forward that could slip through the gaps of Carlton’s defence early and open the scoring.

Carlton’s superstar skipper has tried to go forward many times this season, but his subpar goalkicking repeatedly lets him down. Patrick Cripps is an unstoppable midfielder when he is at his best, yet his ability to mark the ball going forward is underrated. Cripps should straighten up his radar this week and slot a goal for the Blues.

The weather in Perth has been wet and wild over the past week, with many rainstorms dampening the field at Optus Stadium. We have already seen two matches out of Fremantle’s last three where scoring has been limited due to the conditions, and the forecast indicates another day of rain. Considering Hawthorn and Freo only put 80 points together last week, we can expect this one to be around the same mark.

We were surprised to see the Dockers as outsiders for this game considering they beat the Pies and Hawks in their last two matches. The Blues will be without Jack Martin and struggled against Hawthorn at Optus in round 10, so we are tipping Justin Longmuir and Freo to notch their fifth win of the season.