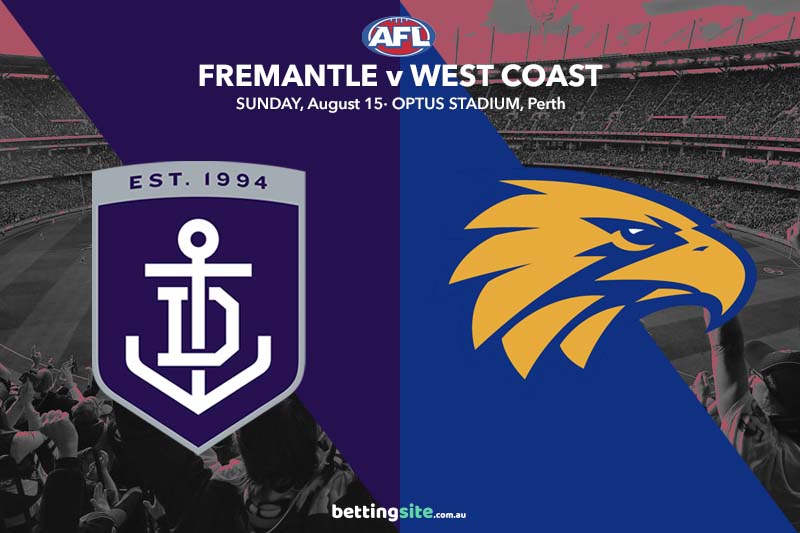 The round 22 derby between the Dockers and Eagles at Optus Stadium Sunday will shape the AFL ladder, as the race for a spot inside the AFL top eight nears its climax.

Both the Dockers and Eagles failed to register a victory last week, leaving the WA teams in a vulnerable position with two games to play.
The Eagles currently sit seventh on the AFL ladder after losing to the Demons by nine points, while the Dockers dropped to 12th after the Lions smashed them by over 10 goals.

Andrew Brayshaw has been a shining light for Fremantle this season, but he will not participate this Sunday after receiving a one-match suspension.

The Eagles will bring back three experienced stars in Luke Shuey, Liam Ryan and Tom Barrass, providing a much-needed boost to their backline, midfield and forward-line.

There’s one thing we know for certain heading into this game – no matter where these cross-town rivals sit on the table, the clash will be an intense one.

Dry conditions are forecast, which will benefit West Coast’s aerial specialists. The inclusion of Tom Barrass allows the Eagles to play more aggressively from the back half, as the likes of Jeremy McGovern and Brad Sheppard will have more freedom to come off their man and intercept incoming attacks.

Justin Longmuir has implemented a very slow and conservative brand upon his Dockers, instructing his players to prioritise defence. Nathan Wilson is one of Fremantle’s more adventurous ball-movers out of the back half, but he has been ruled out with a hamstring injury. Hayden Young is a player who can step up to fill the void of Wilson, making him an intriguing option to get 20 or more disposals.

Although this will be Liam Ryan’s first game back from a minor hamstring injury, he is still one of the most dangerous players in the Eagles’ talented forward-line. James Aish has been an effective small defender since joining the Dockers in 2020, but he could have his hands full with Ryan’s athleticism, but we think the Dockers will back in his underrated ability overhead.

Ryan has kicked 18 goals in 12 matches this season, which includes five outings with multiple majors. Aish kept the bouncy Eagle quiet in their most recent encounter, but Ryan is always a dangerous option given his elite hands and athleticism.

The Eagles will start this contest as hot favourites, but we think the Dockers will be competitive given their season is on the line. The last Western Derby was easily won by the Eagles back in round seven, but the Dockers will come into this contest with a much stronger backline and should be able to stay within 39 points. This market is available at many of the top Australian online bookmakers.

Hayden Young to get 20+ disposals

Young had an interrupted start to his career, but he is starting to bloom into a capable rebounding defender after putting two quality performances together. Young’s elite kicking will be utilised, while Nathan Wilson is sidelined with a hamstring injury, giving the second-year draftee more opportunities to rack up disposals.

Hayden Young to get 20+ disposals

Liam Ryan will kick a pair of goals on return this Sunday and help the Eagles register a season-saving victory. Hayden Young will step up and perform very well in his first Derby at Optus Stadium, where the future star should easily surpass the 20-disposal mark.