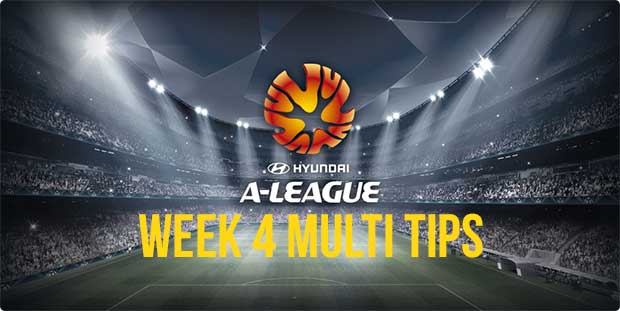 WE are fast approaching the four week point of the A-League season and still there is no clear standout teams putting their hand up to separate themselves from the pack.

Six teams are in single figures for the A-League title at Sportsbet.com.au and positions one through to seven are separated by just five premiership points.

For teams outside that logjam however, the situation is becoming dire even at this early stage of the season.

Adelaide United ($13 for the title at Sportsbet.com.au) has just one point to their name, and if they are unable to take away at least another point from Melbourne City the finals could already be off the cards even though we will are just four weeks into the season at the completion of the round.

It is all to play for at the four week mark in the A-League.

It is a tough week to predict but we have elected four matches that we think we have analysed brilliantly and we are confident of getting a nice return for our loyal readers.

All the odds for the fourth week of A-League action were provided by Sportsbet.com.au.

Selections for the round 4 A-League multi of the week:

For the second week in a row Melbourne City kick off the round of A-League action, this time hosting the reigning premiers Adelaide United at AAMI Park.

City were stunned last week by the Glory, going behind three times in the game to lose 3-2 to drop their first points of the season.

Adelaide’s disappointing start to the A-League campaign continued last Saturday night after they conceded a stoppage time winner to their bitter rivals the Melbourne Victory.

After three rounds the Reds have just one point to their name.

We are not expecting Adelaide to add to their points tally here. City should bounce back after last week’s disappointment to record a comfortable home win.

Second game of the A-League is in Sydney this week as the Wanderers host the Mariners at Spotless Stadium.

Both teams will be keen to atone after disappointing round three outings.

The Mariners had plenty of opportunities to at least snatch a point against the Roar at home but failed to capitalise, going down 1-0.

The Wanderers 2-2 draw alongside the Jets might look acceptable when looking at the result on face-value, but the manner in which the result came about will anger manager Tony Popovich.

Western Sydney had a 2-0 lead heading into the final ten minutes of regulation time but two inconceivable errors at the back lead to Newcastle equalising, coming back to snatch an unlikely point.

The Wanderers will have dwelt on the draw all week and we have no doubt they will come out firing on Saturday night.

WSW to win is the safest leg of our multi.

Two of the premiership fancies in the form of Brisbane and Perth take us into the third leg of our multi in what promises to be the game of the round.

The Roar are coming off a nail-biting 1-0 win over the Mariners last weekend. Brisbane were lucky to escape Gosford as winners but they will take the victory.

Perth caused the upset of the season so far, ending Melbourne City’s two-game winning streak after recording a fantastic 3-2 win.

For the second week in a row Perth will travel the thousands of kilometres to make this game and we are certain that the hectic road schedule will take its toll late in the match.

We are backing the Roar to make it two in a row.

Monday, 31 October from 7.50pm AEDST, Etihad Stadium, Melbourne
A Melbourne Cup eve match up rounds out the fourth week of A-League action as the Victory and the Phoenix do battle under the Etihad Stadium roof on Monday night.

The Victory are fresh off their finest win of the season, a 2-1 win over the reigning premier Reds away in Adelaide.

Marcos Rojas left it until the 94th minute to seal the deal, sending the Victory fans into raptures in the process.

The Phoenix are the only team in the league without a point to their name at the completion of the third round. The most worrying sign for the ‘nix is the fact that they have failed to score a goal this campaign.

The Victory are aiming to make it five wins from their last six meetings against the Phoenix and we think they should have too much in the tank for a struggling Wellington outfit.