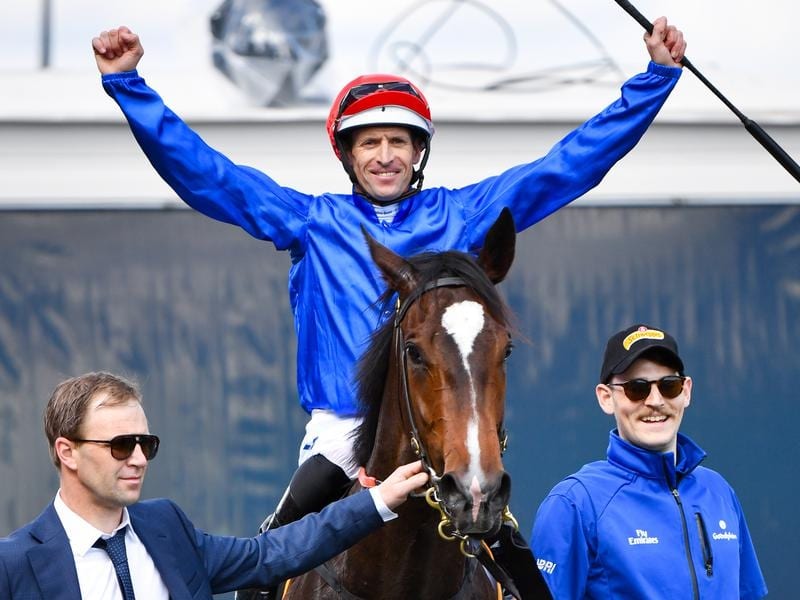 Flit has snatched a last-stride win in the Group One Thousand Guineas for Godolphin at Caulfield.

A tilt at the Cox Plate will be considered for three-year-old Flit after her thrilling win by the barest margin in the Group One Thousand Guineas at Caulfield.

The James Cummings-trained Flit was sent out the clear-cut $2.35 favourite in Saturday’s 1600m feature for three-year-old fillies but champion jockey Hugh Bowman had to pull out all stops on the filly over the concluding stages to get home in an exciting three-way finish.

Powering through between runners late, Flit got her head down at the right time to beat Missile Mantra ($8.50) by a nose, with that pair chasing down Southbank ($17) who looked the winner 100m out but was collared in the final strides to finish another short half-head away third.

Flit had been a luckless runner in the Prelude two weeks ago but delivered when it counted in her main spring target, just her second but most important win in her sixth start.

Her previous victory was a dead-heat in a Group Three for two-year-old fillies at Flemington in March.

Flit is the only filly among the 35 remaining entries for the $5 million weight-for-age Cox Plate (2040m) at The Valley in two weeks in which she would carry 47.5kg.

“We’ve got that decision to make,” Cummings said.

“We can let the dust settle on today. We have to enjoy the win and a target that has well and truly been pulled off.

“She came into this today with half a win to her name. While she can keep making ground and having the run with flashing lights on them, there is something to be said for winners. To come here and win a Group One with such little winning experience says a lot about her future.

“She can always lay claim to being a Thousand Guineas winner and that’s a great title for her to hold and a wonderful achievement for all of the staff.”

Bowman believes the pace of Saturday’s race was against Flit who he said was flat footed when the sprint went on, before picking up strongly late.

“She’s a quality filly and it wasn’t a real test today,” Bowman said.

“It was just a sprint home so I don’t think we saw the best of her.

“I think if it was a genuinely run event she would have won more comfortably.”

“For her to run so well and get beaten, it’s just disappointing,” Snowden said.

“But you can’t be disappointed with the run. She ran absolutely enormous.

“It’s just so gut wrenching to get beaten that much. I’d sooner get beaten two or three lengths than half an inch.”