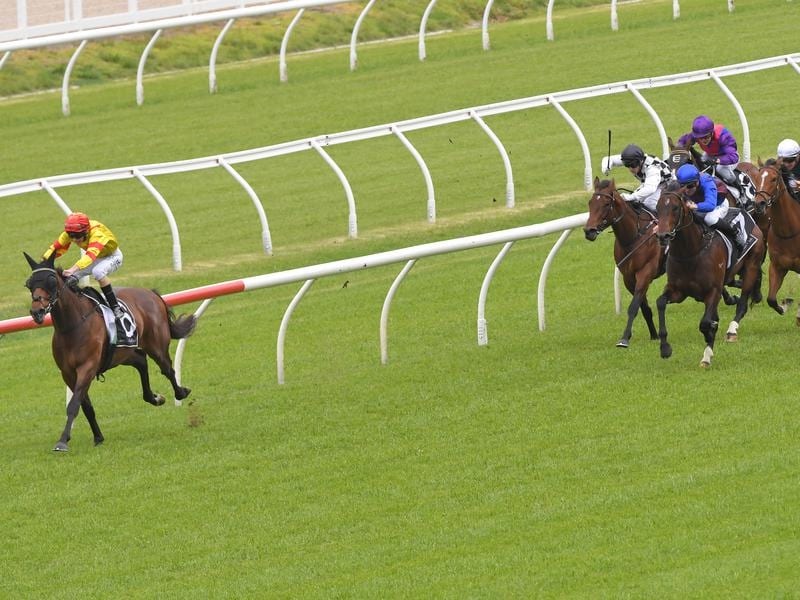 A confident front-running ride by Sydney’s champion apprentice Robbie Dolan has been the catalyst for Colada’s record-breaking win in the Group Two Stan Fox Stakes at Randwick.

Dolan took the initiative on the Gerald Ryan-trained Colada ($20) and the gelding stretched out in the straight when he was entitled to get tired to beat Brandenburg ($9) by two lengths in 1m27.43sec for the 1500m.

The time bettered the standard of 1m27.77s set in May by recent Epsom winner Kolding over a distance rarely run at Randwick.

The $2.20 favourite Bottega, a stablemate to the winner, finished third, a neck behind the runner-up.

Ryan said Colada had shown two starts ago when he won at Canterbury, he appreciated rolling along in front and that was the plan again on Saturday.

“Robbie has only ridden him twice and ridden him that way two times although admittedly one was a maiden,” Ryan said.

“He’s had a terrific prep. With due respect to Tommy (Berry) he went too slowly at Newcastle with the big weight and ran third.

“He just needs to roll and freewheel.

“(Owners) Sun Stud are great to train for. I said to them six weeks ago to target this race. It was finding out the proper way to ride this horse.”

Ryan said both three-year-olds would head to the $1 million Bondi in two weeks and the step up to 1600m would be to Bottega’s liking.

Dolan described Colada as a beast and said he needed to be controlled while at the same time doing as he wanted.

“He’s a beast, it’s tough to get him to relax, but he’s just needs to go to the front and do his thing,” Dolan said.

“It probably looked like he was going hard in front, a little bit keen, but he felt really relaxed down the back.”

“I just waited until we started to turn, I clicked him up and he picked up the whole way up the straight.

“He’s not an easy horse to work with and credit to all of Gerald’s team and to Gerald himself.

“I have to thank the owners for putting me on. They could have put any jockey on today and they stuck with me.

“It’s great. My parents in Ireland are probably up watching.”