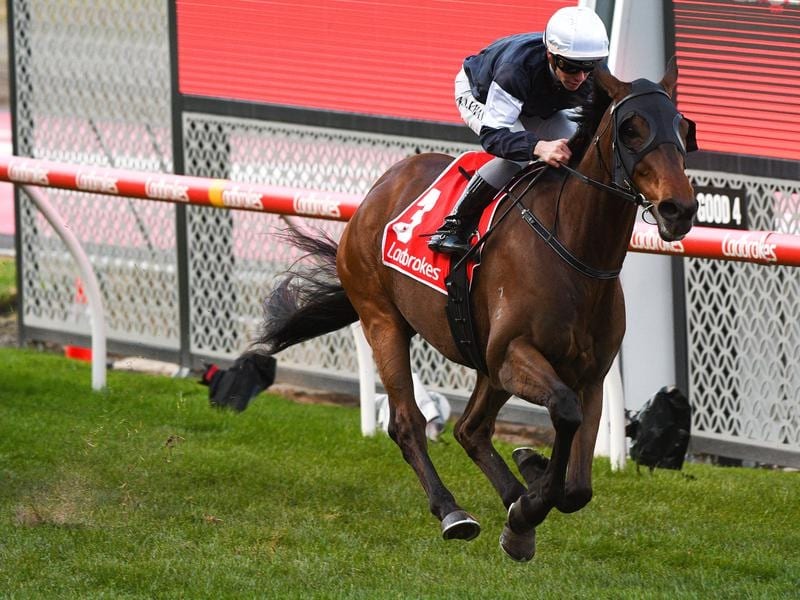 Homesman is guaranteed a place in the Cox Plate after a first-up win in the Feehan Stakes.

Homesman has won a golden ticket into the Cox Plate courtesy of a comprehensive win in the Feehan Stakes at The Valley.

The winner of Saturday’s Group Two race bypasses the ballot into next month’s $5 million Cox Plate at The Valley.

Placed second in the weight-for-age race 12 months ago, Homesman was handled perfectly by Ben Melham, tracking the leader Trap For Fools ahead of taking over on the home turn and going on to record a 2-1/2 length win.

Homesman was narrowly touched out by Best Solution in the Caulfield Cup last year and Saturday’s outing was his first race since.

Nick Williams, who shares in the ownership of the gelding with his father Lloyd, along with a number of other partners, said the Cox Plate was firmly on Homesman’s agenda.

“He was terrific today and there’s nothing in racing that would mean more to us than to get our hands on a Cox Plate,” Williams said.

“We’ve tried many times and come up short, but he seems to be heading in the right way.”

Williams said Homesman would follow a similar campaign to 12 months ago, the one deviation being running in the Cox Plate instead of the Caulfield Cup.

“Since we’ve had him in this time, the Cox Plate has been his aim, and will be his aim.

“We’ll look to go on to the Underwood, and defend it, and then onto Caulfield Stakes and then back to The Valley for the Cox Plate.

“We’ve got to win one here before they change this iconic track.”

Melham thinks the Cox Plate could be within Homesman’s reach saying the gelding is possibly more seasoned this time around.

The jockey was taken by the win of Homesman, especially his turn of foot over what Melham described as an unsuitable journey.

“There’s a big carrot here and he’s probably a genuine chance of being capable of winning a Cox Plate.”

Peter Hall, rider of Trap For Falls, was charged with careless riding near the 1200m mark and issued an eight-meeting suspension.