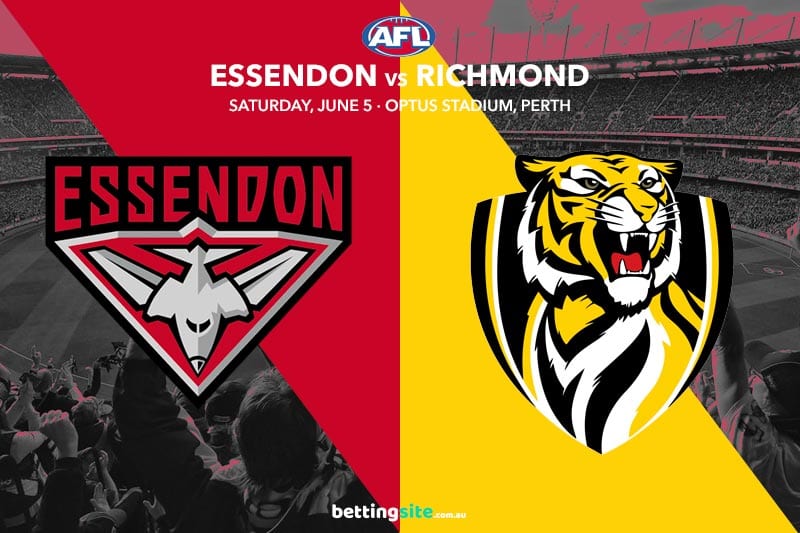 The AFL’s annual Dreamtime at the ‘G fixture heads away from Melbourne for the second year running, as the Essendon Bombers and Richmond Tigers will now clash at Optus Stadium this Saturday night.

Last year’s Dreamtime game was played in Darwin for the first time, and the ongoing COVID-19 outbreak in Victoria has forced the league to relocate the 2021 edition to Perth.

The Bombers are coming off one of their most inspiring wins in recent years, knocking off the West Coast Eagles at Optus Stadium in round 11. The Tigers have won the last 10 clashes against Essendon, but they could be vulnerable against the Dons this weekend.

Richmond star Shane Edwards has timed his return from injury perfectly, as the three-time premiership player is expected to return from his ankle injury this week. Toby Nankervis will miss the next month of footy with a sprained PCL, while David Astbury (Achilles) is also expected to miss another week.

Ben Rutten will be sweating on the fitness of Sam Draper (ankle) and Peter Wright (calf), but it is unlikely both players will return this week, while Aaron Francis should be an instant inclusion after missing the round 11 clash with illness.

Damian Hardwick’s Tigers have reigned supreme against the Bombers in recent times, but this could be the match that breaks the streak. Essendon made Optus Stadium its home last weekend and overran a very tough West Coast, while the Tigers struggled in patches against the Adelaide Crows.

The last five bouts between these sides have ended with a low total score, only surpassing the 155-point mark on one occasion. Despite this, online bookmakers are starting the total points line at 172.5, which looks ripe for the unders.

Anthony McDonald-Tipungwuti was electric against the Eagles last week, while Shai Bolton also starred for Richmond in round 11. Bolton notched up a career-high 29 disposals in his last Dreamtime clash, claiming the Yiooken Award for what was a breakout performance. Tippa is in career-best goalkicking form with 27.9 this season, making him one of the most accurate forwards in the AFL.

After beating the Eagles in stunning fashion last weekend, we think the Bombers will get very close to the reigning premiers. The Tigers will not have either of their first-choice ruckmen this week, while spearhead Tom Lynch is also still sidelined. The underdogs will actually be the team to beat this Saturday night, as all the momentum is with Essendon.

There are not many small forwards in the AFL who have kicked a goal in almost every game this season, but Anthony McDonald-Tipungwuti has been near-unstoppable. AMT has kicked multiple goals in nine of his 11 outings this season, including each of his last six matches. Tippa is a classy player who will rise to the occasion and slot a late goal in this contest.

We expect a low-scoring affair where the Bombers make a statement and possibly win the match. Anthony McDonald-Tipungwuti and Shai Bolton love the big stage and should step up to the occasion.