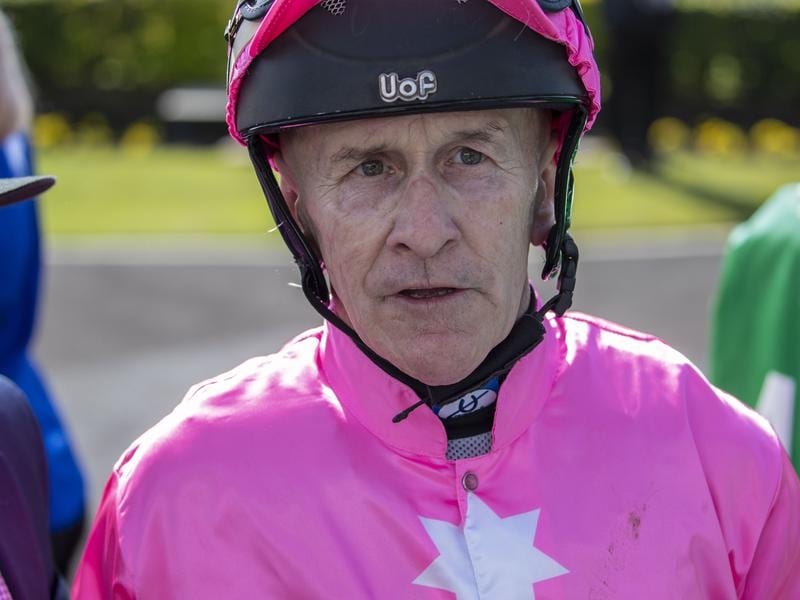 Retired jockey Jeff Lloyd has made a return to the saddle to ride Tyzone in a barrier trial.

Gold Coast trainer Toby Edmonds has called on his long-term “go-to-man” Jeff Lloyd to get a progress report on his Melbourne-bound galloper Tyzone.

Lloyd retired from race riding in July but has been riding some trackwork as well barrier trials.

Edmonds called on him to ride Stradbroke Handicap runner-up Tyzone who wasn’t knocked about in beating smart mare Manaya in a trial over 900m at the Gold Coast.

A multiple premiership-winning jockey, Lloyd has also been keeping an eye on his son Jaden who has begun a career as an apprentice in Victoria.

“Jeff can still ride a bit and he was very happy with the way Tyzone went,” Edmonds said.

Tyzone will head to Melbourne in fortnight with his first start in the Gilgai Stakes at Flemington on October 5.

“He won’t have another trial here but we are hoping to get a jump-out at Flemington so he can have a look at the straight,” Edmonds said.

Tyzone’s stablemate Winter Bride was unplaced in the trial but pleased Edmonds.

In Brisbane, premier trainer Tony Gollan won seven trials at Doomben including a handy effort by his smart galloper Garibaldi.

The colt beat Ballistic Boy and another Gollan runner in Vincere Volare.

Both Garibaldi and Vincere Volare are entered for races at Doomben and Flemington.

“Garibaldi will stay in Brisbane for Saturday. He was in the Danehill Stakes in Melbourne and it is a strong race,” Gollan said.

“He had a minor setback which has put us a bit behind so he can run here and then head to Sydney or Melbourne.”

Gollan said Vincere Volare and stablemate Niedorp would both run in the Cap D’Antibes Stakes in Melbourne.

“I am very happy with them and this looks nice race for them,” he said.