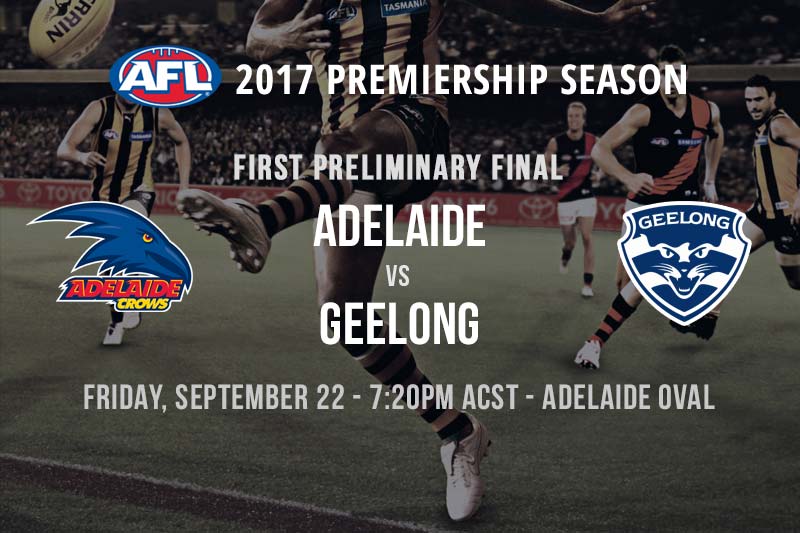 ADELAIDE and Geelong on Friday night footy will see some of the AFL’s best ball magnets and goal sneaks go head-to-head in the always-popular exotic markets.

The Crows attack boasts a glorious spread of goalkicking options, but we saw last week what the Cats can do when they get the mix just right.

Both midfields feature some prolific accumulators, although it remains to be seen how much time Geelong’s top gun spends on the ball.

We have scoured the online bookies and come up with the best prop bets, dark horses and players specials for the preliminary final at Adelaide Oval.

Ladbrokes is offering enhanced odds on all first goalscorer markets for the third week of the 2017 AFL Finals Series.

All you have to do is add your selection to the bet slip, tap the ‘Odds Boost’ button and watch your player’s price soar.

Sign up at Ladbrokes.com.au and check in daily for the latest footy betting specials.

Taylor Walker ($9.50 at Ladbrokes) – Big Tex has his critics, but he so often steps up for the Crows at the business end of the season. It should surprise nobody if the Adelaide skipper shakes his marker early and strikes the first blow of the night.

Patrick Dangerfield ($10.50 at Ladbrokes) – Danger could easily have finished with seven or eight goals as Geelong blitzed the highly fancied Sydney Swans last week. He did his best work playing forward early, which is where he is tipped to start on Friday.

Richard Douglas ($23 at Sportsbet) – While not a prolific scorer from week to week, Douglas has that happy knack of nailing his chances at crucial moments. Look for him to coast unmarked into the 50 while Geelong’s stoppers are busy with Eddie Betts et al.

Zach Tuohy ($41 at Ladbrokes) – If you are seeking a real roughy in the first goal markets, Geelong’s Irish rebounder is well worth a look. The Cats trust his leg from range, so he may get a few chances to bomb away from outside 50.

Several bookmakers already have detailed disposals markets up and running for this weekend’s footy finals.

There are some obvious choices, especially for the Crows, but the uncertainty over Dangerfield’s starting role leaves things a little more open on the Geelong side of the betting.

We like the long shots on offer at Sportsbet.com.au, where you can pick your own disposals brackets for selected players on either team.

Mitch Duncan for 30+ disposals ($1.85 at Ladbrokes) – The Dangerwood combo grabs the headlines, but Duncan has enjoyed another terrific season at the Cattery. He was Geelong’s standout midfielder in the first fortnight of finals and will have a huge role to play in Adelaide.

Paul Seedsman for 25+ disposals ($8.50 at Sportsbet) – Brodie Smith’s injury absence leaves a playmaking vacancy on the Adelaide halfback line. Former ANZAC Day medallist Seedsman was bright in the win over GWS Giants and has been known to rack up numbers in big games.

Steven Motlop for 25+ disposals ($4.50 at Sportsbet) – Geelong’s number 32 rediscovered his X-factor with a season-best showing against the Swans. More of the same this week will make him a real chance to crack the quarter-tonne in the disposals betting.