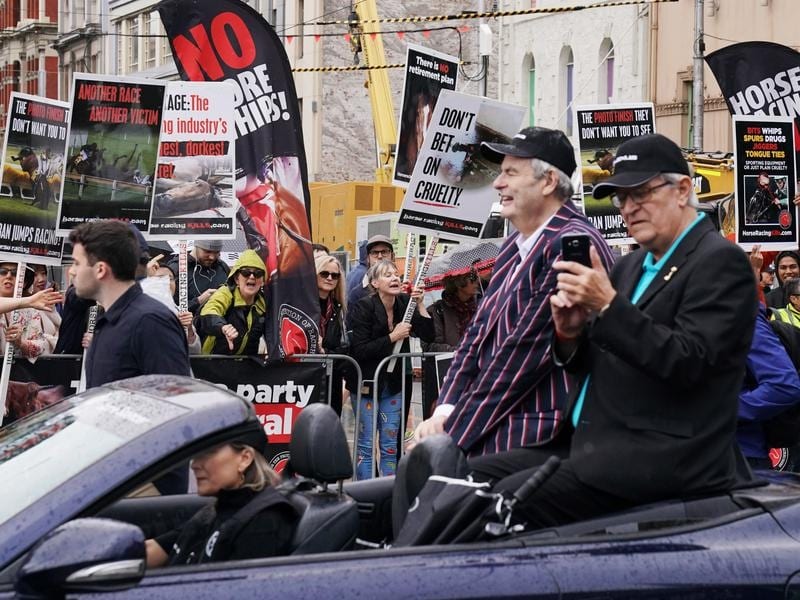 Thousands of people have braved the rain for the Melbourne Cup parade, including hundreds of protesters angry about the treatment of former racehorses.

The traditional Monday parade through Melbourne’s CBD, ahead of the running of the $8 million Cup on Tuesday, attracted more anti-horseracing activists than usual despite the downpour.

The Coalition for the Protection of Racehorses took up its usual position at the end of the parade route, chanting “Blood on your hands,” “Animal abusers total losers” and “Say nup to the Cup” as the procession of trainers, owners and jockeys made their way down Swanston Street to Federation Square.

Spokeswoman Kristin Leigh said the group had been inundated with support since ABC’s 7.30 program broadcast footage last month of racehorses being sent to a slaughterhouse.

“People are certainly waking up to the truth behind this industry. People can’t say they don’t know anymore,” she told AAP.

“If you’re going to the races this year and you saw 7.30 you are complicit in that animal abuse.”

“He’s adjusted so well to it, he’s doing fantastic,” she said of the former Bart Cummings-trained horse.

Ms McIntyre said the footage aired in the 7.30 report was horrific.

“I think it’s revolting, the abattoirs need to clean up their acts,” she said.

“These horses have an amazing opportunity once they’re retired and we need to really celebrate that and show everybody what they’re capable of.”

Another protest is planned outside Flemington racecourse on Tuesday.