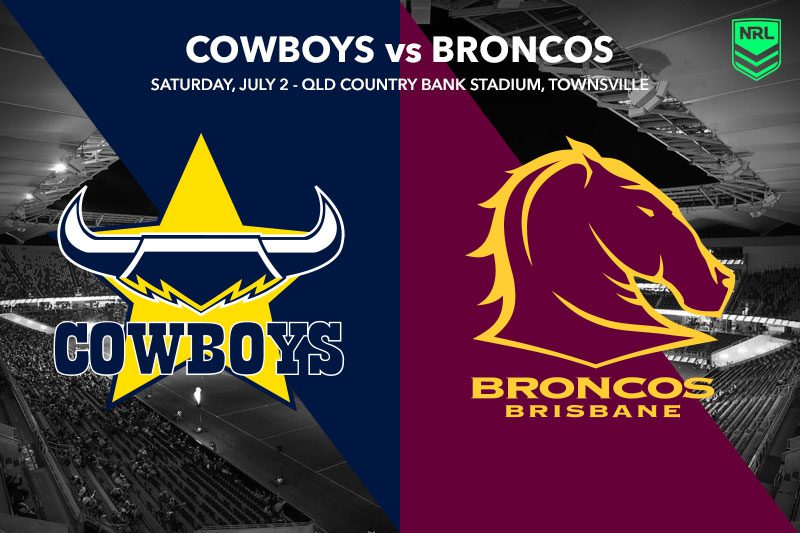 The true Queensland Derby will kick off at 5:30pm this Saturday when the Brisbane Broncos travel north to take on the Cowboys in Townsville.

The history of these two clubs and their encounters, especially in most recent years, has been absolutely incredible. From golden-point thrillers to field-goal finishes, these two clubs rarely disappoint when they meet. Most recently, the Cowboys thumped the Broncos in Brisbane, scoring five tries in 25 minutes to blow their opposition off the park. Can the Broncos return serve on Saturday?

The Cowboys had been firing on all cylinders in the weeks leading up to representative round, and the acquisition of Luciano Leilua from the Tigers will only add to their 2022 NRL Premiership credentials as he makes his Cowboys debut Saturday. The Broncos are hoping the return of Origin and international stars such as Selwyn Cobbo, Kotoni Staggs, Payne Haas and Kurt Capewell will boost their chances of winning, despite Haas battling ankle and shoulder injuries.

In 53 matches between these two clubs, the Broncos have been victorious on 33 occasions with one draw between them. Prior to their most recent clash, previously mentioned, Brisbane triumphed in a 19-point win. One hurdle the Broncos face is the trip to Townsville, having only a 50% win rate in the new stadium. Given the form the Cowboys have been in this season, they’re hard to go past at home. The Broncos are expected to put up a fight, however, and this creates value in the Cowboys 1–12 margin at $2.75 with BetOnline.

The Cowboys have shown a tendency so far this season to score their tries on the left-hand side of the field. This is the Broncos’ right side, which is their stronger defensive side. Look for the cowboys to go the other way, attacking the Broncos’ weaker left-hand side. Should the Cowboys take advantage, Hamiso Tabuai-Fidow is a great play as an anytime tryscorer paying $2.

Another Cowboy to keep an eye out for is the man who terrorised the Broncos earlier this year. Be it through the air or on the ground, Jeremiah Nanai was in everything in round three, scoring an incredible hat-trick that Broncos fans are still losing sleep over. Nanai’s since rocketed into the Queensland State of Origin side, and he looks a great anytime tryscorer option at $2.95.

Rain is predicted to hit Townsville over the weekend, which may make tryscoring harder than usual for these two sides. However, there is always the tendency for these two to pile on the points regardless. Another factor that could inhibit the pointscoring ability of the Broncos is Adam Reynolds and his injury issues. The Broncos have proved they don’t need Reynolds to score or win, but they are much better with him on the field. Taking the Broncos to score between 11-20 points is the smart play in this match.

These two halfbacks have reinvented themselves this season at their new clubs, staking their respective claims as best buys for the 2022 NRL season. Both have brought the professionalism and game management that was so clearly lacking for the Broncos and Cowboys, and equally necessary for the young players at their clubs to learn and thrive in first grade. These two will not be looking to run for 200m or break half a dozen tackles; rather, they will look to put their teammates in the right positions to make things happen in the attacking half.