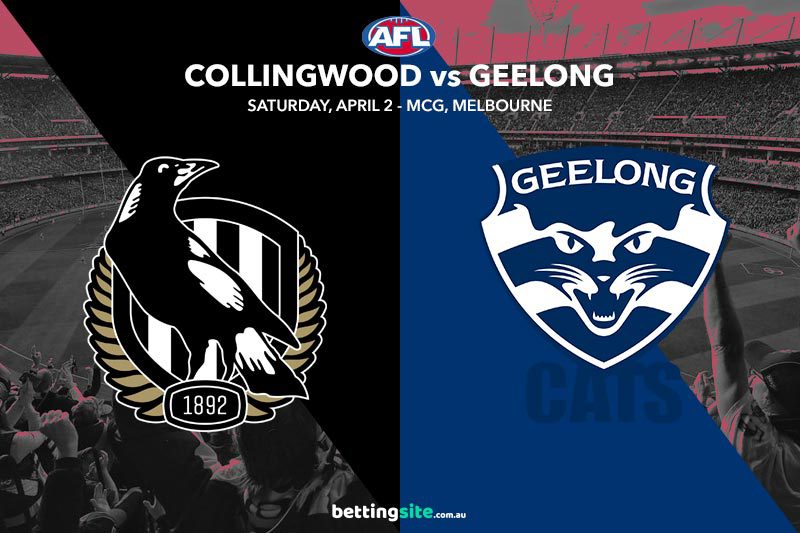 Can the Collingwood Magpies keep their winning form alive this Saturday night, or will the Geelong Cats flex their muscles and record an important round three victory at the MCG?

Craig McRae has gotten off to a flying start as coach of the Pies, who have won their first two matches of the 2022 AFL season and sit second on the ladder.

Chris Scott and the Cats were against the odds in round two when they faced Buddy Franklin and the Swans, but this experienced team is eager to get back on the winner’s list this weekend.

The Pies will welcome back Brayden Maynard to their defensive unit this weekend, while a pair of young forwards in Beau McCreery and Nathan Kreuger will sit this one out through injury.

Shaun Higgins did not make the trip to Sydney in round two after being rested, but the classy midfielder should make a seamless return into Geelong’s starting 22.

Last season’s clash between these sides was one to forget for Collingwood fans, as the Pies kicked 0.7 in what was an historically bad opening half for the club.

The opening two rounds showcased how well the Pies backline can hold up under pressure, but can it handle the combination of Tom Hawkins, Jeremy Cameron, Esava Ratugolea and Tyson Stengle?

Jordan De Goey in full flight often reminds us of vintage Patrick Dangerfield, as his burst out of the centre square can be lethal. ‘Danger’ was extremely quiet against the Swans last week, collecting just 13 disposals despite playing over 85% of game time. The Cats star needs to wind back the clock this week against the dangerous Collingwood midfield, as his influence will be critical to Geelong’s chances of victory. De Goey simply needs to keep up his excellent work, which sees him sitting fourth in the AFLCA votes with 15 out of a possible 20 votes.

We are not completely buying into the hype surrounding Craig McRae and his young Magpies, as they are yet to play any top-tier opposition in 2022. The Cats are going to bounce back after a very flat performance against the Swans and register a decent victory here, as their dynamic forward-line should overpower the Magpies.

With Beau McCreery going down for the Pies, someone needs to push forward and hit the scoreboard in his place, and we really like the early form of Pat Lipinski. The former Bulldog has started his Collingwood career with two classy left-foot goals in the opening two rounds, and we think his scoreboard impact continues for the high-scoring Pies.

The Cats should break out of their slump this Saturday night and leave the MCG with a victory over the Magpies, who may have trouble applying pressure in the front half without the energetic McCreery. Also get on Lipinski to hit the scoreboard and Dangerfield to have 25 or more touches.