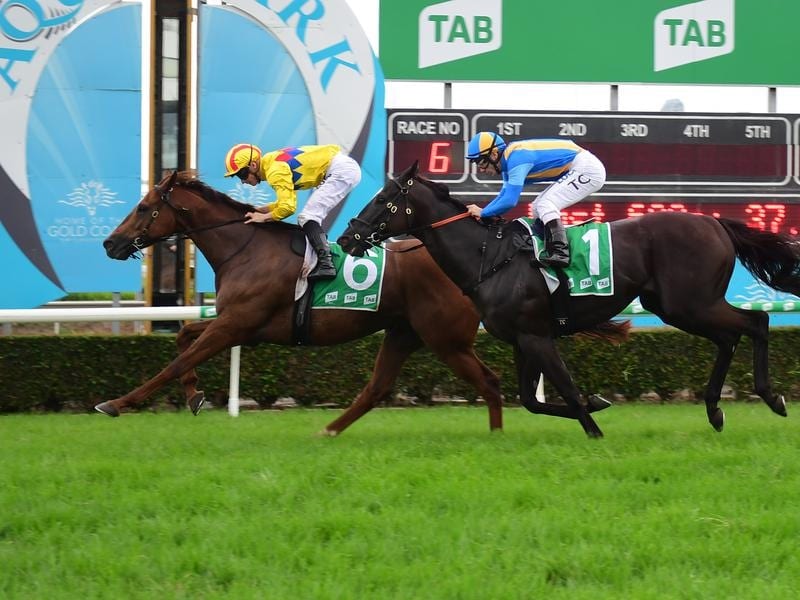 Coldstone (left) won for Tony Gollan after the trainer had to scratch several Gold Coast acceptors.

Trainer Tony Gollan had at least one bright spot on a day when his plans with star three-year-old and ruling Stradbroke Handicap favourite Zoustyle’s winter were thrown into chaos by a heavy track.

Gollan had Ef Troop and Zoustyle in the Gold Coast Guineas and Outback Barbie in the Silk Stocking.

He scratched Ef Troop early in the day and Outback Barbie was a late scratching before Zoustyle followed as it became apparent the Gold Coast track was extremely heavy.

Gollan was doing media interviews after his horse Coldstone won the Listed Australian Turf Club Trophy when he got a phone call from one of the owners to discuss whether to run Zoustyle.

Gollan said the decision to scratch Zoustyle would now place a real doubt on the unbeaten gelding running in the Group One Stradbroke on June 8.

“The owner rang and instructed me to scratch him. We would look silly if we ran such a valuable horse on the track and something went wrong.

“It now looks as though we will have to re-evaluate his whole winter as he needed today’s run to get ready for the rest of the campaign.

“It is what it is but it is very disappointing.”

The win was some consolation as Gollan had pinpointed the Cup months ago.