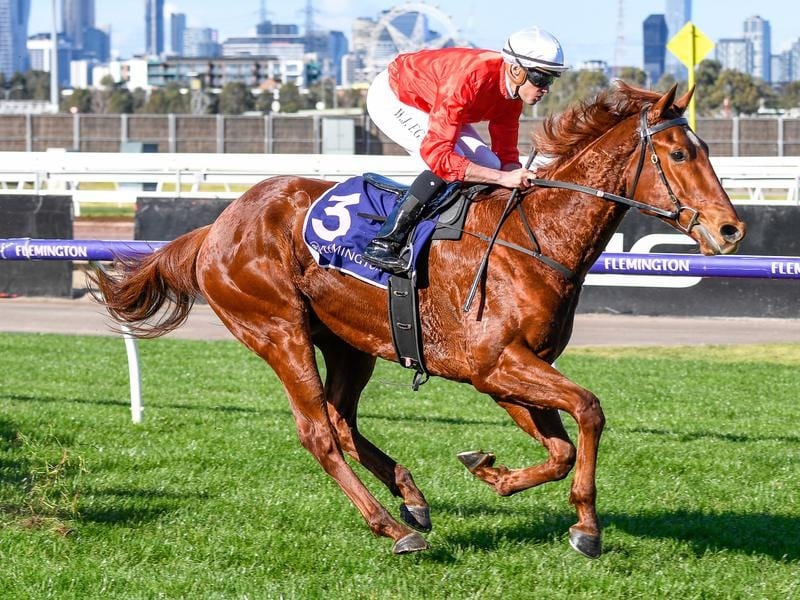 Cherry Tortoni, a close relation to champion Tie The Knot, continues to make a name for himself.

A promising two-year-old gelding with family links to former champion Tie The Knot has maintained an unbeaten start to his career at Flemington to give trainer Patrick Payne his 100th winner for the season.

Cherry Tortoni, who races in the famous red colours with a white cap worn by a number of top-line horses over the years including Tie The Knot, backed up a maiden win at Sale last month with victory in Saturday’s Rod Johnson Handicap (1420m) at his second start.

The gelding is by Night Of Thunder out of the mare Tortoni.

Tortini is a half-sister to Tie The Knot who starred on Australian racetracks during the late 1990s and early 2000s, winning 13 Group One races.

Payne rode Tie The Knot in three of those Group One wins during his career as a jockey before turning to training.

Cherry Tortoni, who started $3.30 favourite, came with a well-timed run in the straight under Billy Egan and surged to the line to score by 1-1/2-lengths over Albarado, with Insaaf three-quarters of a length away third.

“Knowing the horse, that was pretty impressive,” Payne said.

“We haven’t given him the full education yet so there is more to do.”

The Listed Taj Rossi Series Final (1600m) in two weeks at Flemington is a logical next option for the gelding while Payne said there were no firm spring plans yet.

“He’s the type of horse that doesn’t need a big break so we’ll look at something in the spring but not sure what as yet,” he said.

“He’s going to be a pretty handy horse in the future,” Egan said of Cherry Tortoni.