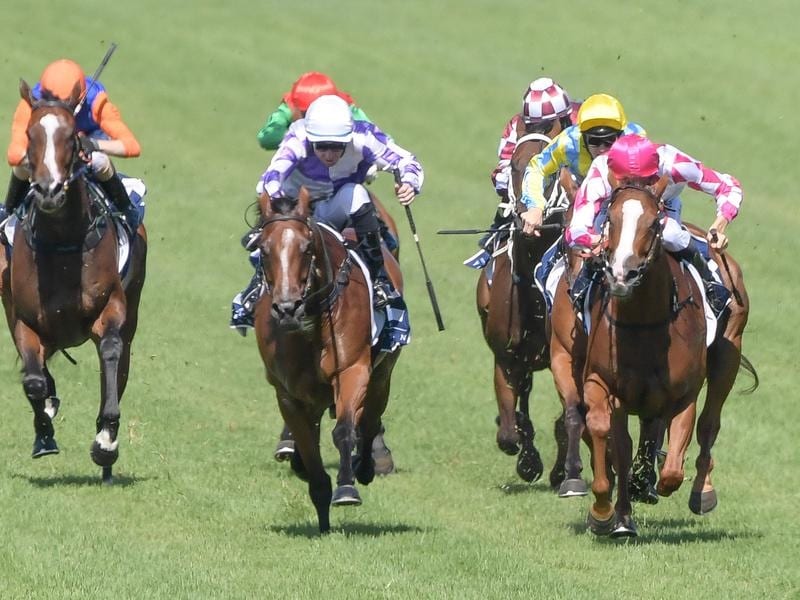 Classy mare Champagne Cuddles will continue to race in blinkers as she chases an elusive first Group One win at Doomben.

Saturday’s Doomben 10,000 the first of three Group One races she will contest during the Brisbane winter carnival.

She has shown she is up to elite company with Group One placings in the Stradbroke Handicap, Kingsford Smith Cup, Flight Stakes and Golden Rose in the past 18 months.

At her past two starts she wore blinkers when she recorded fourths in the TJ Smith Stakes and All Aged Stakes.

“If any horse deserves a Group One win it is her. She had no luck in either the All Aged or the TJ Smith but hit the line hard in both, “Baker said.

“She had trouble getting clear running in both her most recent starts and when you are against very best sprinters it is a worry.”

Baker said he would have liked a better barrier for Champagne Cuddles than 10 but hopes there will be plenty of early pace to help her find a position with cover.

He pointed out Champagne Cuddles was capable of running fast times as she showed clocking a course record 1:7.6 when she won the Gold Coast Guineas last year.

As the winner of $1.2 million prize money, Champagne Cuddles is already a valuable broodmare but Baker expects her to race on into next season.

“She is still only four and there are Group One wins waiting for her,” he said.

Baker has a soft spot for Doomben because he won his first Group One race with Music Magnate in the 2016 Doomben 10,000.

Music Magnate will also be in action at Doomben on Saturday where he is topweight in the Listed Members Handicap with Jim Orman to ride.

“I thought his second last start in the ATC Trophy at the Gold Coast was very good as he had a big weight and the track was very heavy,” Baker said.