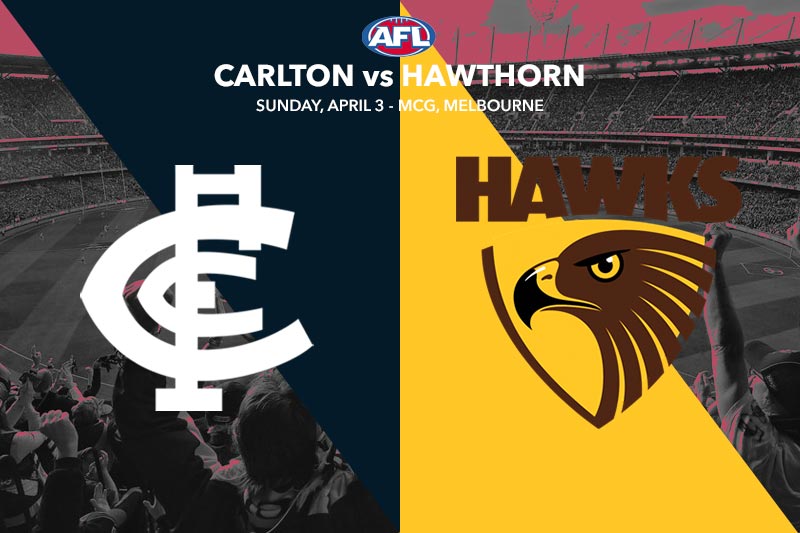 Neither the Carlton Blues nor the Hawthorn Hawks were much chop last season, yet they enter this Sunday’s contest at the MCG as two of the hottest teams in the AFL.

The Hawks are first on the ladder after beating a lowly North Melbourne outfit in round one and humiliating the Power at Adelaide Oval last weekend.

Blues fans are up and about after their side beat the Tigers and Bulldogs in their opening two matches, but they are even more excited to see the team playing inspiring football.

Harry McKay and Charlie Curnow look like an incredible duo up forward for Carlton, while Sam Walsh, Adam Cerra, Matthew Kennedy, George Hewett all look amazing in the midfield around their captain, Patrick Cripps.

The Hawks will regain Will Day in their back six after he made it through a VFL contest, while Jack Martin and Adam Cerra join the Baggers following a week in isolation.

Oscar McDonald and Mitch McGovern will both miss out this weekend for the Blues through injury, but this will open the door for new recruit Lewis Young to make his debut in the navy blue.

Sam Mitchell’s Hawks are playing a very attracting offensive style of football, but it has been their tight backline that is the most impressive. As impressive as their backline is, the trio of McKay, Curnow and Tom De Koning will cause some headaches.

Patrick Cripps is at the peak of his powers, putting together two best-afield performances to start the year. Jaeger O’Meara is one of the few midfielders in the competition that have the power and class to run with Cripps, but can the veteran Hawk stop the Carlton juggernaut?

After racking up 30 disposals and three goals in round one, Cripps followed up with another 35 touches and two majors. O’Meara needs to keep Cripps away from the goals if he wants to give the Hawks a chance of winning, as the Blues’ captain can turn a game in an instant.

Although the Hawks have a decent midfield led by 2018 Brownlow Medal winner Tom Mitchell, they do not have the defensive capabilities to keep up with Carlton’s squad. We think Harry McKay and Charlie Curnow will also cause some headaches up the ground, while Jacob Weitering has all the tools to handle the in-form Mitch Lewis.

When a player is form as hot as Patrick Cripps, you have to keep rolling with their momentum. Cripps has been unstoppable to start the season and should keep up his good work against the Hawks, who allowed three Port Adelaide midfielders to collect over 35 disposals last week. You can even consider the Carlton champion to kick multiple goals, as he should push forward with purpose this weekend.

Lock in the Blues for a big win against the Hawks this Sunday, as Patrick Cripps dominates again and Charlie Curnow follows up his five-goal haul in round two with a few more majors.