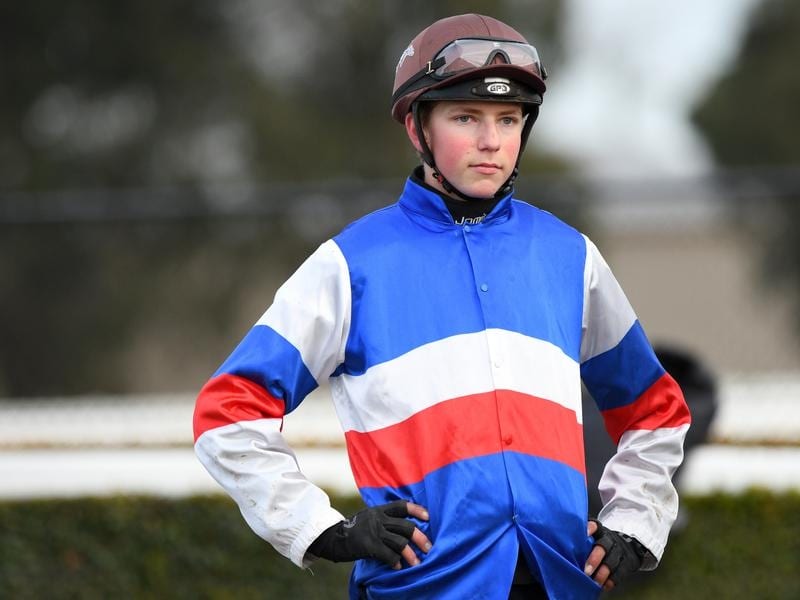 Apprentice Campbell Rawiller, son of Nash and nephew of Brad, has ridden his first winner at Moe.

Apprentice Campbell Rawiller has taken little time to notch his first winner as he embarks on a career in the saddle.

Competing at his second meeting on Tuesday at Moe in Victoria after making his race riding debut at a Jerilderie non-TAB fixture in the NSW Riverina on Saturday, the son of multiple Group One-winning jockey Nash Rawiller rode $31 chance Girl On A Train to win a 1628m benchmark-58 race, a heat of the Rising Star series.

His best result on Saturday was a third in a race won by fellow 4kg-claiming apprentice Jaden Lloyd, son of recently retired champion jocky Jeff Lloyd.

The Cameron Templeton-trained Girl On A Train came from the tail of the field down the outside to win by three-quarters of a length in a moment 18-year-old Rawiller will long remember.

“It’s just great to get here and finally start putting the dream together.

“I always loved my AFL when I was quite young but I was always at the races with Dad and it was something I got very passionate about.

“I loved the horses all along and it’s just so exciting.

“We’ve got a long way to go and a lot more hard work to go but it’s just nice to get this today.”

Rawiller is indentured to Mornington trainer Logan McGill and is in his first year of Racing Victoria’s Apprentice Jockey Training Program.

Nash Rawiller was riding at Wyong in NSW on Tuesday.

Another of the famous Rawiller racing family, Campbell’s uncle Brad, was quick to post on Twitter after the race, with the multiple Group One-winning rider writing: “So proud of Campbell riding his first winner with a typical Rawiller ride from last to first!”