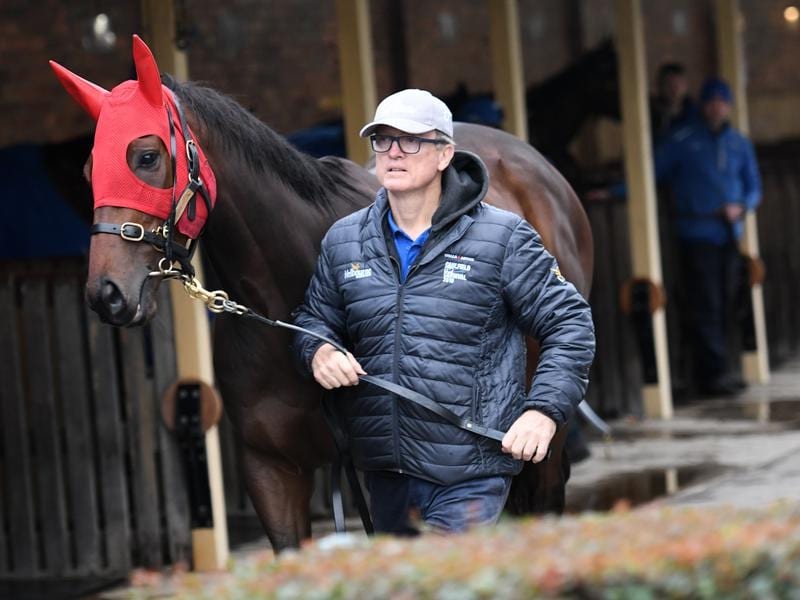 Qld trainer David Vandyke has taken Alligator Blood to Caulfield ahead of the Guineas Prelude.

Queensland trainer David Vandyke is banking on an early morning trip to Caulfield to have a calming effect on Alligator Blood ahead of his Melbourne debut.

Unbeaten in four starts in Queensland, Alligator Blood is set to run in the Caulfield Guineas Prelude on Sunday and was afforded an early look at the track and surrounds on Tuesday morning.

A previous trip away from home resulted in Alligator Blood being a late scratching from the Ming Dynasty Quality at Rosehill on August 31 after becoming agitated in the race day stalls.

Vandyke returned Alligator Blood to his Sunshine Coast stable and the three-year-old won on his home track on September 15.

Tuesday’s visit to Caulfield provided Vandyke the opportunity to give Alligator Blood a look at the race day stalls, pre-parade ring and importantly the track which has not always proven a happy hunting ground for Queensland and NSW horses in their first starts on the circuit.

“It was his first time here and he seemed a bit lost so I certainly wouldn’t want to be coming here on Sunday for the first time,” Vandyke said.

“We’re under no illusion. It’s a big step up and Caulfield can be a tricky track for first timers, so we’ve got an open mind, but he certainly deserves his place in the field.

“If he was taking on this grade in Queensland I’d be a bit more confident, but we’re away from home turf and hopefully he does us proud.

“Hopefully we draw a good barrier, but I think he can be competitive.”

Vandyke said Alligator Blood had continually snuck under the radar with the trainer yet to know where the ceiling is with the gelding.

“Every hurdle we’ve put in front of him he’s leapt and he really deserves a crack at the big time and that’s what we’re here for,” Vandyke said.

Former Victorian jockey Ryan Maloney, now based on the Gold Coast, returns to Caulfield on Sunday for the ride on Alligator Blood.