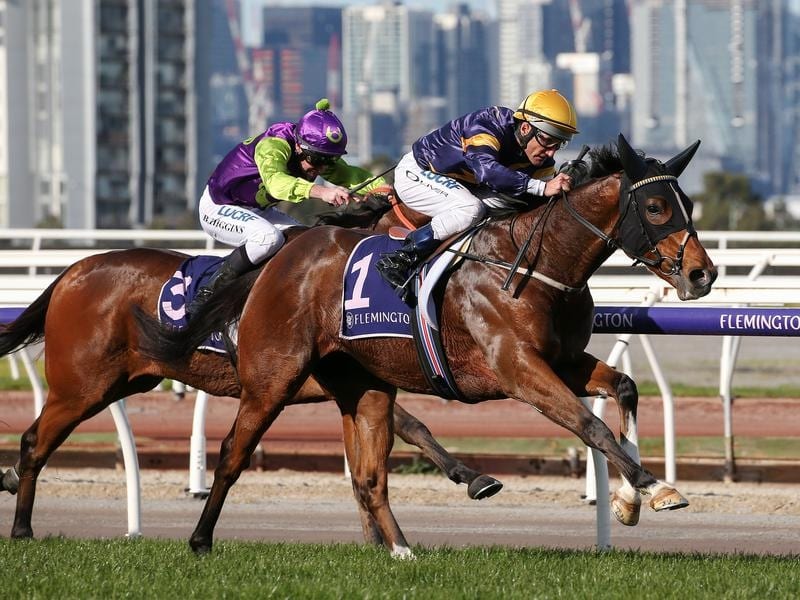 Buffalo River was was taken straight to the front by champion jockey Damien Oliver and never headed.

After convincing wins at Ballarat and Sandown in his first two Australian starts since joining Moroney’s stable, Buffalo River was sent out odds-on favourite ($1.55) in Saturday’s Silver Bowl Series Final for three-year-olds at Flemington.

He was taken straight to the front by champion jockey Damien Oliver under top weight of 60kg and was never headed, beating Mr Exclusive by a length with three quarters of a length to third-placed Heavenly Emperor.

Moroney is hopeful of keeping Buffalo River going through to the spring carnival but knows it is also a challenge given the lightly-raced gelding has competed through winter.

“As long as he comes through it all right we’ll try to keep going,” Moroney said.

“We’d like to be able to get him to the spring if we could.”

Moroney pinpointed the $7.5 million Golden Eagle (1500m) for four-year-olds on November 2 at Rosehill as a potential spring target but said he’d see whether the northern hemisphere-bred Buffalo River would get an allowance under set weights conditions, given he’s about six-months younger than the southern hemisphere-bred horses of the age group.

“But we’re just waiting to see what they’re going to do with the weights because we hope we get an allowance. They haven’t announced what they are going to do and if they do give these horses the allowance they deserve, because they are six months behind, well he would be in quite well.

“If we could keep him up for a race like that, it would be ideal.”

Buffalo River took his overall record to four wins from seven starts having had his first four starts in England.