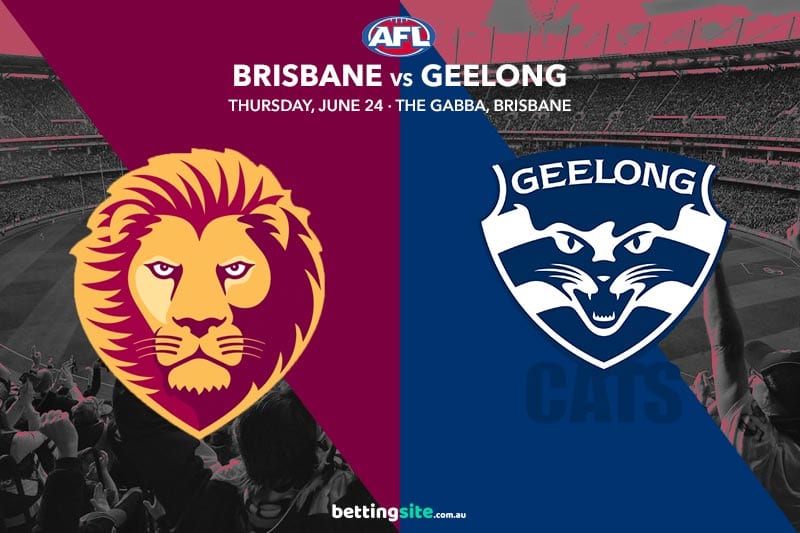 Round 15 of the 2021 AFL Premiership season kicks off this Thursday night with a massive top-four clash between the Brisbane Lions and Geelong Cats at the Gabba.

Back in round two when these sides met at GMHBA Stadium, the Cats snatched a controversial one-point victory after Zac Bailey’s tackle on Mark Blicavs deep inside the Brisbane forward 50 in the last minute went unrewarded in one of the umpiring howlers of the year.

This time the Lions will have the home-field advantage and are in stunning form. Chris Fagan’s side have won eight of their last nine matches, with their only loss in that run coming against Melbourne.

The Cats will have to win on the road without Mitch Duncan, who is set to miss the rest of the home-and-away season with a knee injury sustained in last week’s win against the Western Bulldogs.

Dayne Zorko will return for Brisbane after missing round 14 through suspension, which will be a huge inclusion for the Lions after their recent sub-par performance against North Melbourne.

The only returning player on the horizon for the Cats is their exciting small forward Gryan Miers, who brings a touch of X-factor to the Geelong forward six.

When these sides clashed earlier in the season, the midfielders across both teams dictated the contest. Half of Geelong’s goals came from players running through the middle of the ground, while the likes of Jarryd Lyons and Hugh McCluggage hit the scoreboard for Brisbane. Midfielders offer much greater value than forwards in the goalscorer betting markets at the top bookmakers, so that may be the go this week.

Patrick Dangerfield did not play in round two, as the champion midfielder was serving a four-week suspension. Dangerfield has historically put up impressive numbers against the Lions and will be worth a look in the disposal betting markets.

Lachie Neale was excellent against the Kangaroos last week, racking up 30 disposals and kicking a goal. Mark O’Connor has become one of the best taggers in the AFL, and we suspect he will go straight to the in-form Neale this Thursday night.

AFL bookmakers are offering slightly better odds than usual for the reigning Brownlow Medallist in the disposal markets, perhaps because he has failed to rack up 30 touches in any of his last four encounters with the Cats. The value is there for the taking if you think Neale can get off the chain this week.

The Lions are yet to lose a match at the Gabba this season, which is one of the reasons we are tipping them to win. Chris Fagan’s men have improved since the start of the season, especially the likes of Zac Bailey, Brandon Starcevich and Deven Robertson. The Lions midfield should overrun the Cats this Thursday and secure an important victory for Brisbane.

Hugh McCluggage to kick a goal

Although Hugh McCluggage is not the most accurate midfielder for Brisbane, he pushes forward very often and creates plenty of scoring opportunities. McCluggage has kicked 9.16 from his 13 games this season, almost averaging two shots on goal per week. The former no.3 draft pick should split the middle this Thursday.

We expect the Lions will keep their unbeaten 2021 record at the Gabba alive, but Patrick Dangerfield will be their biggest obstacle. The 2016 Brownlow Medal winner will dominate the disposal tally with Mitch Duncan sidelined, while Hugh McCluggage should sneak forward and kick a major at some stage.