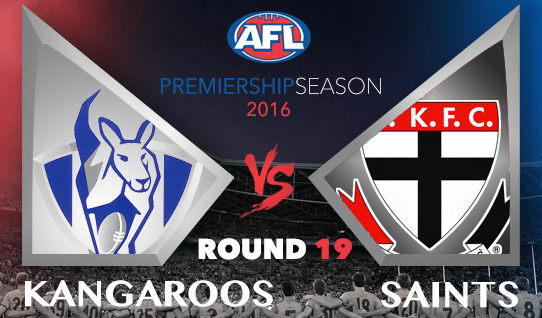 IN a match that could have a huge bearing on who finishes eighth on the ladder, North Melbourne takes on the free-wheeling Saints on their favourite Etihad Stadium turf.

St Kilda, ninth, has won seven of its past nine matches to thrust itself into finals contention, but sits two games and percentage behind the Kangaroos, who are eighth.

A win would see a very tight race in the run to the finals, with the Roos needing to win at least twice against a quartet of top eight teams to assure their spot.

After a shocking five game losing streak, punctuated by injuries and poor play, the Roos got back on the winners’ list with a solid 40 point win over a disappointing Collingwood on the weekend, 18.16 (124) to 12.12 (84).

It was club stalwart Brent Harvey’s 426th AFL game. The pocket dynamo will break the long-standing games record when he suits up against the Saints on the weekend, giving the Roos even more reason to get the job done.

The dependable Sam Gibson was in everything, snaring 33 disposals to go with seven marks and veterans Nick Dal Santo and Daniel Wells did the club proud with 29 each.

Lindsay Thomas had a night to remember, bagging five goals from his 15 disposals and he looms as a key man in North’s run home.

Often criticised for not performing in big games, Thomas has been a live wire for the Roos this campaign, booting 31 goals on the season, including 16 in his last five.

He is the club’s most consistent goal threat this season, outside of mop-haired Ben Brown, who has one more with 32.

Take your pick out of those two men for first goal for the Roos.

Of all St Kilda’s players, Sydney discard Tim Membrey has gone from being an after thought at the Swans to the Saints’ spearhead.

It has been a remarkable turn around from the tattooed beast, who has slammed home 34 goals in just 12 matches this season.

He is certainly one to consider for first goal scorer but, if he does not tickle your fancy, then you can’t go past the Saints superstar captain Nick Reiwoldt.

The Kanga’s defence certainly won’t be looking forward to dealing with the towering running machine and he is set to run them ragged.

The great man had 19 disposals and 10 marks to go with his bag of four, showing again that, like a fine wine, he just gets better with age.

Membrey was the side’s only other multiple goal scorer against the Dogs, with two.

Jack Steven continued his foray into elite midfielder territory with another huge 39 possession game. His ability to run, accumulate and use the ball well has been a key feature for the Saints this season.

The next best player for the Saints was Jack Newness, who had 13 less with 26.

That leads us to our next question:

Which Seb Ross will turn up on Saturday night? The machine that has raked in 30 or more disposals seven times this season, including a monster 37 possession performance against the Bombers. Or the meek man who had just 15 against the Dogs last week?

Ross might just be the most improved player in the AFL in 2016, so we’re backing him in to bounce back in a big way against North. The $3.30 about him to have 30 or more possessions with sportsbet.com.au seems very juicy to us. He is more than capable and worth the punt. He only had 16 against the Ross in the loss earlier this season and you’d think he would be keen on a bit of redemption.

There’s a little bit more to this game. Even though Mason Wood won’t play because of injury, the Roo was part of controversy in Round Seven when he watched the countdown clock tick down to nothing at the end of the game before slotting a set shot after the siren.

The Roos won that game by seven points in the end, 11.16 (82) to 11.9 (75), leaving Saints coach Alan Richardson to wonder if the countdown clock controversy was “a good look for the game”.

Riewoldt booted three goals in that game, had 24 disposals and ripped down 16 marks – translation: he likes playing the Roos.

Leigh Montagna had 34 disposals and, while he has been out of form in recent weeks, this could be his chance to bounce back.

For North, Jack Ziebell had 28 possessions, four players kicked two goals each and Todd Goldstein had 35 hit outs and 17 possessions.

North Melbourne: Daniel Wells to have 25 or more disposals ($1.22 with sportsbet.com.au)

North Melbourne: Nick Dal Santo to have 25 or more disposals ($1.30 with sportsbet.com.au)

St Kilda Saints: Seb Ross to have 30 or more disposals ($3.30 with sportsbet.com.au)

If the Kangaroos had have lost to Collingwood on the weekend, we’d have probably picked the Saints in this one. But the Roos arrested their five game skid in the best possible way with a punishing win over the Pies and should be primed to continue their dominance over the Saints in recent times. St Kilda should provide a stiff test early, but we feel like the battle hardened North Melbourne bodies will have enough to win this one comfortably, despite what is at stake. The Saints will shift their focus to next year after this weekend, while the Roos will have their eye on a tough run home where they play four top eight sides.