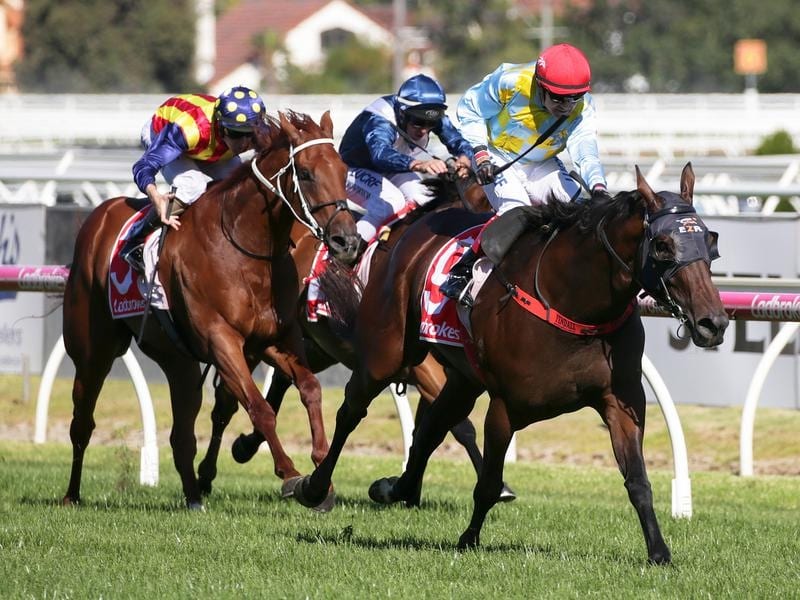 Oakleigh Plate winner Booker is ready to resume in the McEwen Stakes at The Valley.

Oakleigh Plate winner Booker’s return in the McEwen Stakes at The Valley will also act as an audition for the Group One Moir Stakes.

The Mat Ellerton and Simon Zahra-trained Booker resumes in Saturday’s 1000m Group Two weight-for-age McEwen, her first start since failing in the Group One Goodwood in Adelaide in May.

“She’s super. She has had two good trials at home.”

Ellerton said he had considered starting Booker’s preparation in a race on Saturday on the Memsie Stakes program at Caulfield, where the stable had a winning double with Crystal Dreamer in the Group Three The Heath and Age Of Chivalry in the 1400m open handicap.

“I thought if she could run well in the McEwen we may well target a race like the Moir,” Ellerton said.

“Weight-for-age might not be her go but we’re going to try it.”

Booker has won four of her 17 starts highlighted by the Group One Oakleigh Plate (1100m) first-up in February this year.

She was then unplaced in the Newmarket Handicap (1200m) two weeks later before finishing in the second half of the field in the Goodwood (1200m) at Morphettville after a let-up.

“She pulled up crook after the Newmarket and probably in hindsight we should have just pulled the pin and waited for the spring,” Ellerton said.

“But we ran her in the Goodwood and hindsight says we probably shouldn’t have. She got back and nothing made ground. But anyway, she’s had a good spell.

Lightly raced four-year-old Age Of Chivalry could get his chance in the Group One Sir Rupert Clarke (1400m) at Caulfield in three weeks, having won his past two starts in a benchmark-84 and Saturday’s open handicap.

“He needed to do that to get his rating up if we’re going to get into a better race,” Ellerton said.

“It’s just whether he’s going to be able to sneak into a race like the Rupert Clarke. We’ll probably give him his chance to do it.”