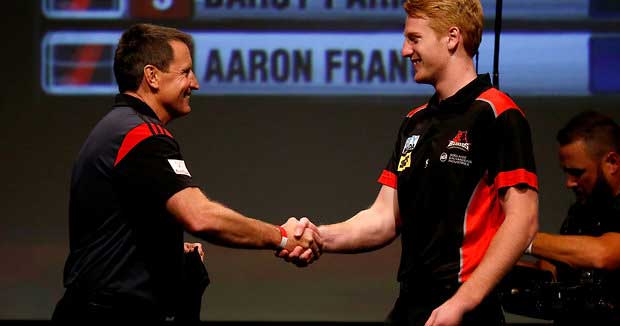 COULD 2017 be the year of the baby Bombers again?

Three weeks out from the 2016 AFL National Draft, bookmakers have released odds on next year’s Rising Star award that will give Essendon fans reason to get out of bed in the morning.

The 2015 number 6 pick in the draft, Aaron Francis, will likely start next season as the favourite for the rookie award at $4 with Sportsbet.com.au.

Wait, it gets better.

With the number one selection in the upcoming draft, Essendon will also get first look at the best young talent in the land – adding either one of Andrew McGrath or Hugh McCluggage – second and third on the Rising Star betting market behind Francis.

THE AFL Draft is less than three weeks away, with the burning question on everyone’s lips: who will be taken at number one?

Sportsbet.com.au is unsure which way Essendon will go, but if its 2017 Rising Star market is any indication it will be McGrath who gets the nod. The online bookie has priced McGrath as the $9 second favourite from McCluggage at $10.

Gippsland Power forward Ben Ainsworth joins Jacob Hopper (GWS) at $12 on the fourth line of betting, with potential GWS academy pick Will Setterfield next at $14 and big bodied midfielder Will Brodie priced at $15.

“It has been a challenge trying to separate McGrath and McCluggage but we have given the slight edge to McGrath due to his electrifying pace and slightly more developed body, but there isn’t a lot in it,” said Sportsbet.com.au’s Ben Bulmer.

“While all eyes will be on the number one pick, we think it will be last year’s number six pick who will take the competition by storm in 2017, with Aaron Francis starting at a short $4 to win the 2017 Rising Star after an injury interrupted 2016 limited him to just three senior games.”