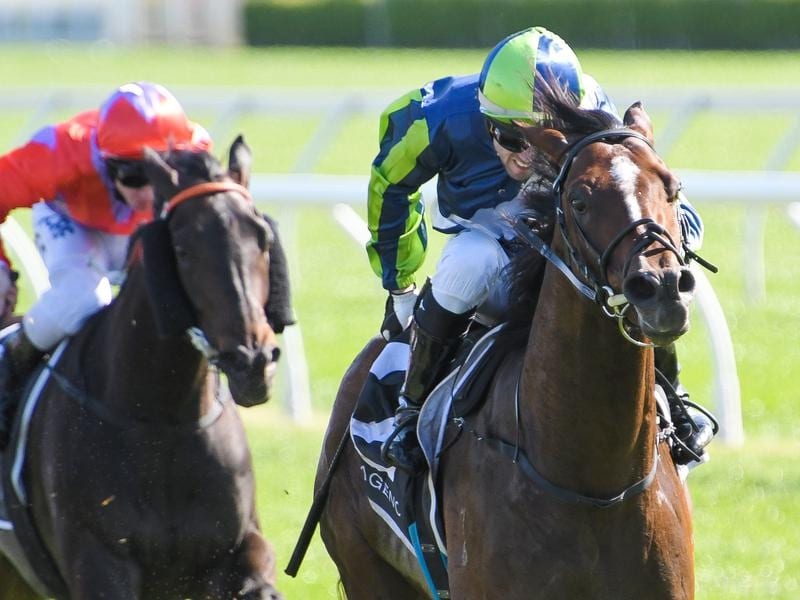 Doncaster third Brandenberg (r) will again take on the older horses in the All Aged Stakes.

Dual Group One-placed colt Brandenburg will race in blinkers for the first time in the All Aged Stakes at Randwick.

Brandenburg has been kept ticking over after his last-start third in the Group One Doncaster Mile on April 4 with a view to the weight-for-age All Aged.

After Brandenburg worked in blinkers over 1000m on Tuesday morning at Randwick, trainer John Sargent confirmed it was all systems go for Saturday’s All Aged (1400m) for what will be the colt’s final start this preparation.

“He doesn’t get in as well at the weights as he did in the Doncaster but he’s a good three-year-old,” Sargent said.

“He won the Hobartville over the distance. He galloped well today. He’ll go to the beach tomorrow and have an easy week and he’ll be ready.

“I was just going to wait for today for his main gallop and he galloped well.”

Brandenburg won the Group Two Hobartville Stakes (1400m) at Rosehill first-up this autumn before finishing a close third in the Group One Randwick Guineas (1600m).

He was beaten less than two lengths at weight-for-age when fourth in the Group One George Ryder Stakes (1500m) before his third in the Doncaster.

Rachel King, who rode Brandenburg in the Hobartville and Randwick Guineas, is back on for Saturday and she rode the colt in Tuesday’s course proper gallop.

“Blinkers have been added, just trying to find another length against a very good field,” Sargent said.

“He’s a colt so they might just add a bit to him where he can concentrate a bit more.

“He’s a very laid back horse so he’s not going to pull with the blinkers on.”

The All Aged has attracted a star-studded list of 22 nominations with acceptances to be taken on Wednesday.

Santa Ana Lane was the $4 favourite on Tuesday ahead of last year’s winner Pierata and Newmarket Handicap-winning colt Biovouc at $4.50.

George Ryder Stakes winner Dreamforce was at $9 with Brandenburg and Fierce Impact at $13.

The All Aged/Champagne Stakes program is the final Group One meeting of the Sydney autumn carnival.

“You wouldn’t get a better field but it’s a good finish to the carnival and that’s what you’ve got to front up against,” Sargent said.

“You can’t shy away from them.”