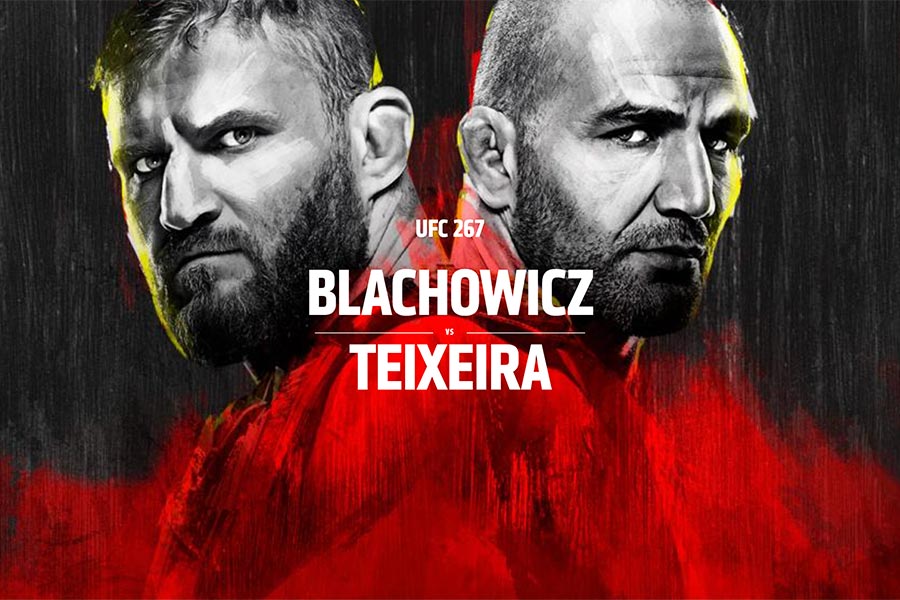 Jan Blachowicz will be looking to make his second successful UFC Light Heavyweight Championship title defense this Sunday (AEDT) in the main event of UFC 267 against Glover Teixeira. We’ll take a look a closer look at this matchup and pick a winner in this UFC 267 main event preview.

When Jan Blachowicz (28-8-0) came into the UFC with a 2-4 record through his first six bouts with the promotion, he looked far more likely to be cut from the UFC than to become one of its champions. But since then, Blachowicz has developed into one of the best pound-for-pound fighters in the world, compiling a 9-1 record over his last 10 fights. Those nine wins include five Performance of the Night bonuses, winning the UFC Light Heavyweight Championship in a bout against Dominick Reyes and a title defense in March against Israel Adesanya.

Glover Teixeira (32-7-0) opened his UFC career with a 5-0 run that catapulted him into a UFC Light Heavyweight Championship match against Jon Jones in April of 2014. Teixeira lost that bout by decision and proceeded to go just 5-4 over his next nine fights. The 41-year-old has enjoyed a career resurgence over the last few years, however, with five straight wins including submission victories over Karl Robinson, Ion Cutelaba and Thiago Santos as well as a knockout win over Anthony Smith. With this recent surge, Teixeira has earned himself another title shot 7.5 years after his first one.

Glover Teixeira deserves props for his recent winning streak and has 100% earned this title shot. With that said, this will be a major step up for him compared to his recent fights. The veteran’s wins over Roberson, Cutelaba and Krylov all came in pretty evenly matched fights, and the upset win over Santos came against a fighter who was making his return off of a long layoff from a handful of serious injuries. In Jan Blachowicz, Teixeira is facing one of the UFC’s best in the heart of his prime.

Blachowicz is such an excellent defensive fighter that it is going to be difficult for Teixeira to break through with his offense. The champion has been stopped only three times in his career, and two of those stoppages came in 2007 and 2011. His durability and strong offensive game should allow him to wear Teixeira down over the course of a five-round fight before eventually securing a knockout victory.