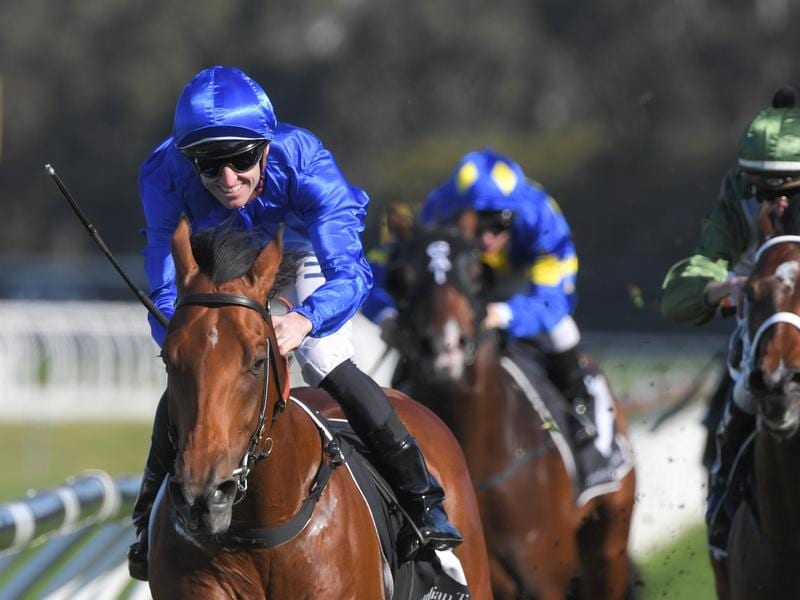 Godolphin’s Bivouac (blue) is the outright favourite for the $1 million Group One Golden Rose.

Bivouac has assumed favouritism from Exceedance for the Group One Golden Rose but trainer James Cummings admits the 1400 metres is an unknown factor.

The Godolphin colt finished second to Exceedance from the Hawes Racing stable in the San Domenico (1100m) but was dominant in the Run To The Rose (1200m) in which his rival was third.

The two had been sharing the top market position at $3.50 but on Monday the TAB tightened Bivouac to $3.20 for Saturday’s feature at Rosehill.

“He really flew to the line in the Run To The Rose and put in a fantastic Golden Rose trial,” Cummings said.

“I’d say that he’s going to be ready to run another big race.

“The Golden Rose is 1400 and Bivouac has got to get up and do it. But we are not going to pull him out of the race out of the unknown.”

After Bivouac’s second to Exceedance in the San Domenico, Cummings decided to remove the blinkers the colt had worn since he was a young horse and he raced tractable to beat Yes Yes Yes by two lengths.

Kubrick ($8) finished a close second to Prince Fawaz in the Brisbane Group One event but his Chris Waller-trained stablemate Yes Yes Yes is more fancied for the Rose at $8.

Yao Dash is also an $8 chance and will be ridden by Adam Hyeronimus.

Owner Dynamic Syndications and trainers Gai Waterhouse and Adrian Bott have made a late call on Yao Dash running in the race.

Nash Rawiller, who rode him to beat Funstar at Rosehil earlier this month, had already committed to Yes Yes Yes.