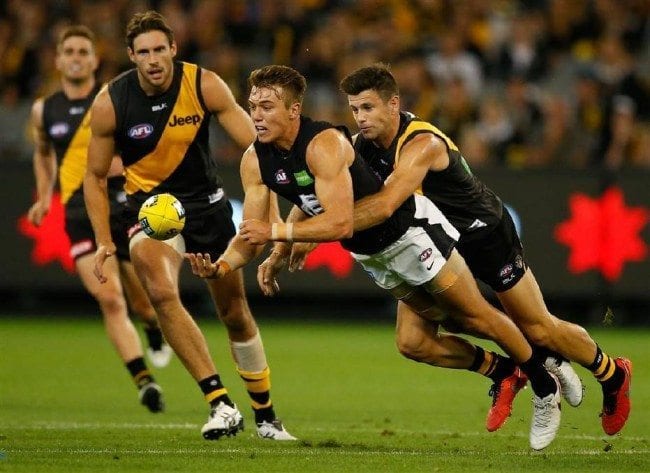 THE football gods are ready to smile upon us.

It’s round one. A new year. A new season.

And it’s time for some new luck – or maybe it’s time to continue a hot streak from 2015.

No matter what, it’s time to have a crack at a multi!

The Tigers have a habit of over promising and under delivering and it looked like they might do it again against a plucky Carlton outfit, which seemed to have more ticker and more fight than their more fancied opponents, spurred on by a superb performance from second year phenomenon Patrick Cripps. The young bulldog seemed to be under every pack and finished with 27 disposals, while the old firm of Kade Simpson (31) Bryce Gibbs (30) and Marc Murphy (27) stood tall in the loss. Matthew Wright booted three goals and boom 18 year old Jacob Weitering looked at home with 17 touches and seven marks.

The Blues led for a large portion of the games and even had a 10 point buffer early in the last quarter. But the Tigers turned it on late to seal the win and kick off 2016 on top of the ladder, thanks to a break out performance from Kane Lambert, who had 28 possessions, and three goals from big man Ty Vickery.

But any way, onwards and upwards, let’s see if we can’t find you a few good tips on the weekend to parlay into some big dollars.

Sydney Swans to win by 1-39 over Collingwood Magpies ($2.25 with sportsbet.com.au)

West Coast Eagles by 40 plus over Brisbane Lions ($1.32 with sportsbet.com.au)

Don’t forget, if you’re on your smart phone or tablet device, like iphone, Android, iPad or Black Berry, sportsbet.com.au has made your multi betting that much easier.

Their new, intuitive multi builder allows you to move between games and betting options – and even other sporting codes – so much easier than clicking in and out of screens.

Click on the multi builder option on the left hand menu at sportsbet.com.au.

Why is there no love for the Dees? Sure, Greater Western Sydney is set to improve on last season, but so will the Dees, surely? It is all about progression and, under Paul Roos, Melbourne has finally started to look like a team that can compete in the AFL.

You only have to look at the big kid up front in Jesse Hogan and their plethora of young midfield bulls to know that this is a side on the up.

We reckon star forward Jeremy Cameron’s four game suspension really hurts the Giants and Cam McCarthy’s injury is an absolute killer. They will struggle to kick winning scores while that pair is out of the game.

We reckon $2.30 about the Demons at home against a travelling Giants side looks like it could be great value.

The Magpies have made a habit of starting seasons fast, so there is an element of risk to this one, but you only have to look at their woeful record on the Sydney Cricket Ground to calm your nerves.

The Pies have not won on this deck since 2000 and the Swans have won 13 of their past 16 meetings at the venue.

We’re excited to see Lance Franklin back in Swans colours, but we’re equally excited to see up and coming midfielder Adam Treloar in black and white stripes.

This one could be a battle of the midfields, with whichever side comes out on top in the guts feeding their hulking forwards. The Swans will hope Franklin and Kurt Tippett can get on the end of a few, while Travid Cloke and Jamie Elliott will be the targets for the Pies.

Scott Pendleberry and Dan Hannebery tend to be midfield barometers for the two teams and a big performance from either player could tip the balance.

Tipped to be the big movers last year, Port Adelaide’s season fizzled out into nothing.

But they say improvement isn’t always linear and the talk out of West Lakes is that Ken Hinkley has fixed the problems of 2015 and it is onwards and upwards in 2016.

The Saints have a talented young nucleus that needs more time to develop.

A trip out to Adelaide for round one isn’t the ideal scenario for a battle hardened premiership contender, let alone a side that finished with just six wins in 2015.

They have been slapped by 63 and 70 points in their last two visits to the Adelaide Oval, so keeping it under 10 goals would be an achievement in itself.

The loss of Paddy Ryder and Angus Monfries to suspension following the Essendon supplements saga hurts the Power, but not enough for them to lose at home to St Kilda in round one.

We’re excited to see how new recruit Charlie Dixon stands up for the Power. Will his injury curse at the Gold Coast follow him south?

One of these teams was one win away from an AFL premiership last season.

The other was about three percentage points away from the wooden spoon.

That gives you an idea of the gulf in talent.

This is the banker of the multi. It’s only $1.32, but that’s for good reason. The Eagles are really, really good. Brisbane, not so much.

West Coast has some serious firepower and actually beat the all conquering Hawthorn in the finals last season, before falling short in the big dance.

Look for big Josh Kennedy to kick off his campaign for back to back Coleman Medals with a bag that might even outscore Brisbane by himself.

Where are the Lions’ goals going to come from? Great hope Josh Schache was the number two pick in the draft and there are massive raps on him. But this kid can’t carry the entire forward line in his first game. Unless he starts slamming on massive bags, it is really hard to see the Lions booting enough goals to be competitive in 2016.

West Coast rarely ever loses at home and they absolutely belted the Lions when they played them at the Gabba last season.

Incidently, this is the first time they have played them in Perth since round 18 in 2012.

The result then was a 98 point shellacking.

That is most definitely on the cards again in this one.