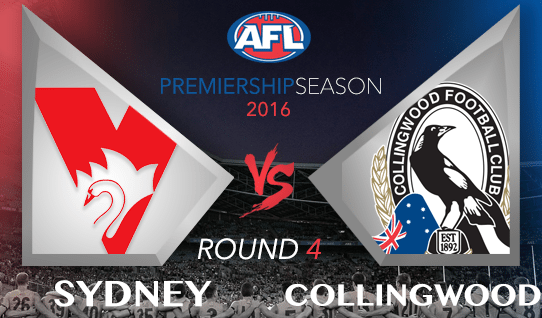 WHAT a cracking Saturday night of round one Aussie Rules football out of Sydney at hand.

It’s been a summer of stories and, now the season is upon us, the controversy hasn’t let up.

The Swans were embroiled in it late last season when their $10 million superstar Lance “Buddy” Franklin pulled out of the finals due to mental health issues and retired legend Adam Goodes .

And the Magpies, fresh off the clenbuterol scandal that impacted Lachlan Keefe and Josh Thomas, have been rocked again by reports several players tested positive to drugs during the off season.

Controversy follows these two teams, so it’s fitting they should square off in round one.

The Maggies have a midfield to die for and are about to unveil new kid on the block Adam Treloar, while the Swans will go in under strength with their co-captain Jarrad McVeigh, Sam Reid, Ben McGlynn and Gary Rohan all set to miss.

The Pies sport a pretty solid record against the Swans, albeit at ANZ Stadium, where they have won their past two.

Will Lance Franklin kick the most goals in the match?

What a massive week it is for one half of the Bondi Millionaire forward line?

Big Lance has had a massive personal battle over the summer, with some fearing that he would walk away from the game altogether.

But the star forward recently told news outlets he never thought about quitting.

“There was never any doubt in my mind I was going to come back,” Franklin said.

“I love playing football – that’s what I love to do – and for me it was just about getting back on December 1 and training as well as possible.

”I love training and I love being around for the football club and for me that being back for round one was a no-brainer.

“It’s not about the goals – it’s about getting out there having fun and hopefully getting the win.“

Buddy will have a huge say in that last bit.

If he fires, the Swans rarely lose.

And we reckon he will be fit and firing for round one and has a big bag on the offering.

He is the $2.75 favourite with sportsbet.com.au to boot the most goals in the match and for good reason. With apologies to the Pies’ Travis Cloke ($4.50), whose kicking boot has let him down more times than he’d care to remember, Franklin is still arguably the best forward in the game and, provided he is as fit as the reports say he is, we can see him getting plenty of the footy and that means plenty of chances at goal.

The myth, the legend, Dane Swan just keeps on keeping on. Like a fine wine, Swannie is still running around like a kid – with a very awkward gait – and contracting leather poisoning every time he sets foot on a grassy field.

We’re unabashed fans of the tattooed one and it feels like he will be the main beneficiary of that high powered Magpies midfield.

Maybe he will spend a lot less time in there, with roles in the forward line or across half back on the offing, but we can’t see that harming his ability to find the football.

The guy averaged 29 disposals on the season in 2015, but he absolutely torched the Swans in round 20, picking up 39 disposals and doing basically as he pleased.

At 32 and after 257 brilliant games for the Pies, Swan has always walked to the beat of his own drum, and that drum could see him out of the AFL by the end of 2016, if you listen to the man himself.

“I haven’t made a decision on whether I’ll play on yet, so at the moment it’s 50-50 I guess whether I go on,” Swan told a newspaper.

”If we win the flag this year I will probably give it away, but that would be the great plan.

“If I can see we’re pretty close to a flag, I think I will try and go on.”

He will have a pretty big say on whether the Pies will win the flag in 2016 and that all starts in round one, where he should be free to run amok against the Swans.

Jump on and enjoy watching him tear the Swans a new one.