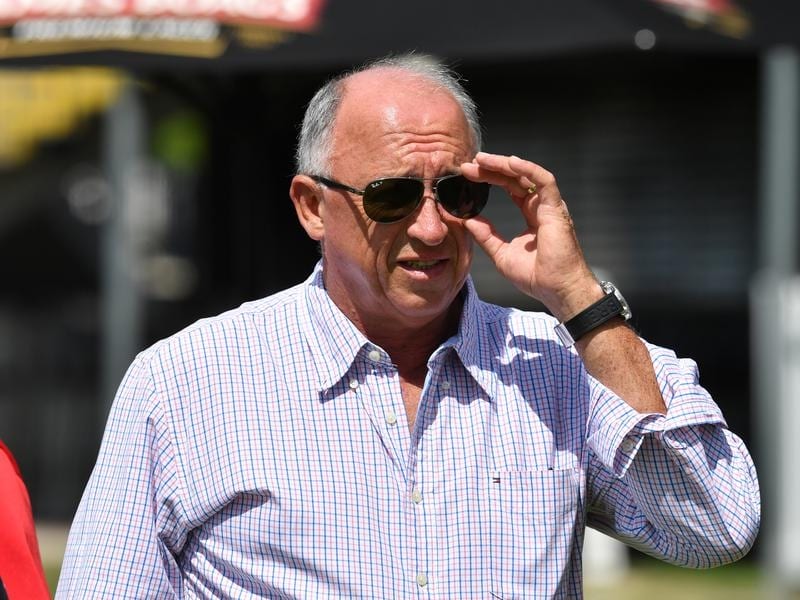 Training partners Chris Anderson and Robert Heathcote (above) are ready for their first G1 runner.

The new Anderson-Heathcote training partnership is looking forward to its first Group One runner with growing confidence.

Chris Anderson and Robert Heathcote will have Ballistic Boy in Saturday’s Group One J J Atkins (1600m) at Eagle Farm.

Ballistic Boy turned in a good Atkins trial when he came from a long way back to run fifth in the BRC Sires’ Produce Stakes (1400m) won by Strasbourg.

“The big fella did a really good job in the Sires and we have been saying all along he will be nice horse over some ground,.

“Ballistic Boy is safely in the field for the Atkins so it has been all go.”

Ballistic Boy is by Smart Missile out of the High Chaparral mare Magical Mist and cost $100,000 at the Magic Millions Yearling Sales.

“He was one of several horses bought by the late Dato Tan Chin Nam’s Think Big Stud to race in Queensland,” Anderson said.

Anderson and Heathcote started a training partnership on May 1 and have had six winners.

Heathcote is second on the all-time list of Queensland Group One winning trainers with 11 including seven with his champion sprinter Buffering.

“If anyone knows how to win a Group One race it is Rob,” Anderson said.

Caloundra trainer Stuart Kendrick is keen to push on with an Atkins start for Eric The Eel who ran fourth in the Phoenix Stakes on Saturday.

“He got too far back to near last and you can’t do that at Doomben. Just wait until he gets on a bigger track,” Kendrick said.

The Atkins is the fifth and final Group One race for two-year-olds in the Australian season.

The Chris Waller-trained Reloaded has regained favouritism after being beaten by Prince Fawaz at his last start.

He is at $4 with the TAB ahead of stablemate Accession and the Anthony Cummings-trained Prince Fawaz at $4.50 and Strasbourg from the Peter and Paul Snowden stable at $5.

Ballistic Boy was at $26 on Monday.