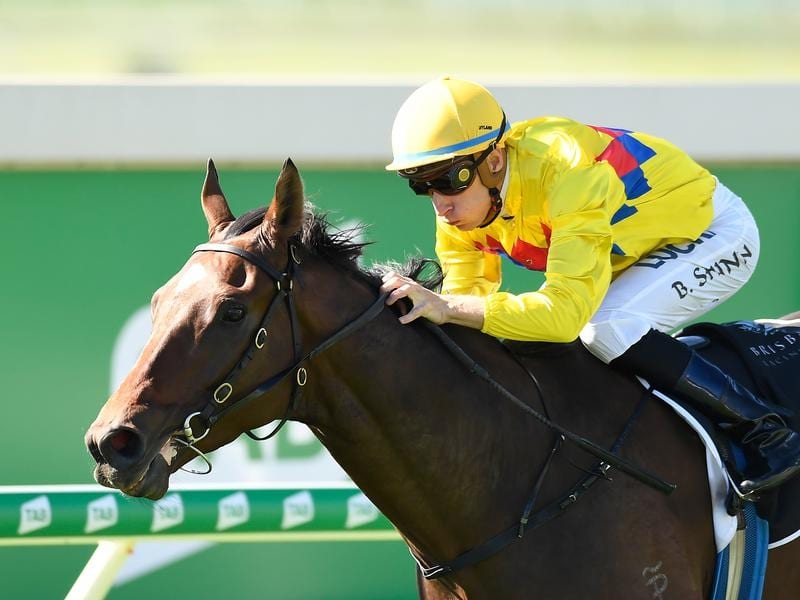 Lightly raced three-year-old Vega One will have to overcome a bad habit in the barrier stalls if he is to be a chance in the big Group races next month.

Trainer Tony Gollan believes Vega One is up to top company – even a Group One Stradbroke Handicap – after his win in the Listed Queensland Day Stakes (1350m) at Doomben on Saturday.

“But first he will have to get over his habit of getting his back leg up on the stalls. It is a trait he has had when I got him. They know he is going to do it,” Gollan said.

Vega One was inspected at the start before being cleared to run and showed he had no ill effects with his runaway win.

Gollan took over Vega One from Sydney trainer John Thompson and now has recorded two wins and two seconds with the gelding.

“I have been saying all along he is a Group horse. He is only lightly raced and would need to win an exempt race like the Fred Best Classic to make the Stradbroke field,” Gollan said.

“But there also the (Group Two) Queensland Guineas which would suit.”

The Fred Best Classic is run on May 25 at Eagle Farm and the winner is exempt from the ballot for the Stradbroke.

Vega One, who is raced in similar ownership to last week’s Gold Coast Listed winner Coldstone, has now won $140,000 in prize money but would need to have a massive lift in ratings to avoid bring balloted out of the Stradbroke without an exemption.

Winning jockey Blake Shinn said Vega One had taken a run in the straight like a good horse.

Kerrin McEvoy said Multaja ran home strongly from back in the field but the winner was too strong.

Mishani Hustler had to be used early to share the lead at a break neck speed and did well to hold on for third.