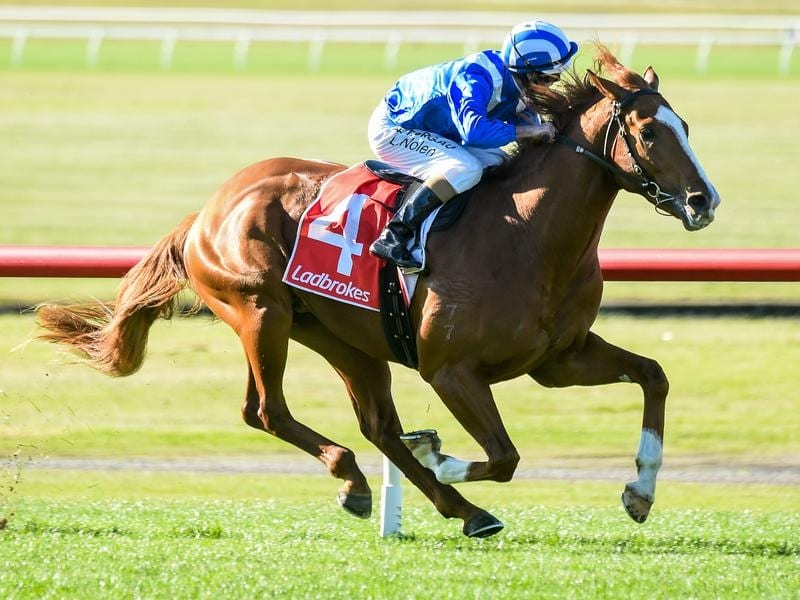 Aysar eased the nerves of co-trainer Ben Hayes with a commanding win at Sandown.

A nervous Ben Hayes wanted to see Aysar produce on race day the kind of performance that he knew was hidden within the two-year-old.

Hayes, who trains in partnership with his father David and cousin Tom Dabernig, was relieved after Aysar raced to a comfortable three length win in the Ladbrokes Back Yourself Handicap at Sandown on Wednesday.

Aysar was ridden with confidence by Luke Nolen as the colt relished the rise to 1300m giving his supporters, who backed him in to run the $2.30 favourite, little cause for concern.

“I always get a bit nervous when I really like a horse and they haven’t done it yet and I just want to see them do it,” Hayes told racing.com.

“He lived up to my expectations and is an exciting horse going forward.”

Hayes said Aysar will only get better when he is stretched out in distance and appeals to the co-trainer as an ideal 1400m to 1600m horse.

“A two-year-old like him we normally wouldn’t have him running this deep into winter, but we wanted to win a race with him as a two-year-old.

“We have ticked that off, so I would say you won’t see him again until he’s a three-year-old in the new season.

“We will just cuddle him at home, tick him over and he will be a fit horse on the scene early in the new season.”

The victory cemented the Lindsay Park stable at the top of the Melbourne Trainers’ Premiership, giving the team a 10 win lead over the Ciaron Maher and David Eustace combination.

Craig Williams stretched his lead to nine in the jockeys’ premiership with a race-to-race double aboard Minyinga and Grand De Flora before Damien Oliver cut it back to eight with victory in the final race on Lunar Flare.

There is six metropolitan meetings remaining for season that finishes on July 31.