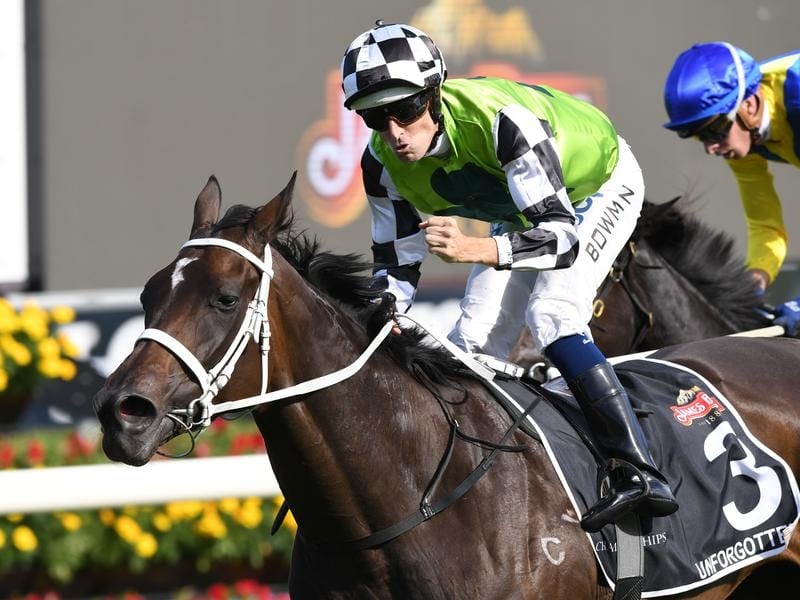 Unforgotten will be one of four runners for trainer Chris Waller in the race named for Winx.

Brenton Avdulla is rapt to be aboard Unforgotten in the first major race of the season, believing she can be the horse to emerge from the shadow of former stablemate Winx.

Any number of horses are bidding to fill the void left by the retirement of the champion although Winx’s incredible career statistics, including a world record 25 Group One wins, are not likely to be bettered any time soon.

Unforgotten was one of the best staying fillies of her generation during her Classic season, winning the 2018 Australian Oaks and she showed glimpses of that promise during her four-year-old year with a Chelmsford Stakes victory and Group One placings in the Epsom Handicap and the Chipping Norton and Queen Of The Turf Stakes.

Avdulla reunites with Unforgotten on race day for the first time since she won her maiden but after partnering the mare in a recent barrier trial and exhibition gallop, he is happy be back aboard.

“She’s trialled well, she galloped Saturday on the course proper and galloped well.

“She’s 1400 first-up in the Winx Stakes with no Winx, so it’s going to be interesting.

“I think the firm track will suit her and she’s a genuine Group One mare on her day that can run very competitively in a race like this.”

Chris Waller has won the Group One Winx Stakes for the past four years – the past three with the race’s namesake.

Along with Unforgotten, he will start new addition Kings Will Dream, who returns after breaking down in the Cox Plate, Youngstar and Verry Elleegant.

James Cummings also has a strong hand with Best Of Days and race favourite Avilius who won the Carlyon Cup at Caulfield first-up last campaign, progressing to a brace of Group One wins during the Sydney autumn carnival.

But Cummings warns that Avilius needs to go to another level again this preparation and will face tougher opposition at Randwick than what he did at Caulfield.

“The pressure of a Group One return at 1400 metres is a bit different,” Cummings said.

“By my estimation, and without getting too carried away, he will run a nice race.

“But the effort he put in last season will be hard to replicate. He’ll be matching it with better horses every start. There’s nowhere to hide.”

Despite Cummings’ reservations, Avilius was the $3.40 favourite on Friday, ahead of Verry Elleegant at $4 with Unforgotten an $11 chance.