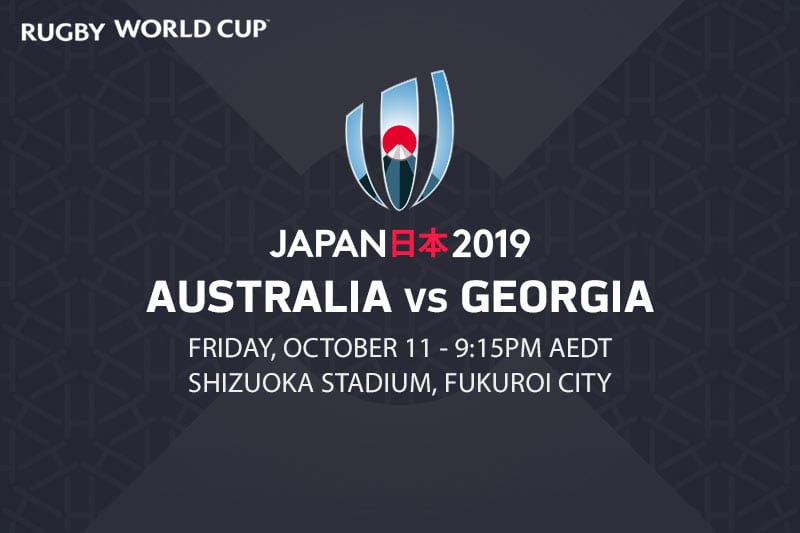 Australia are already through to the 2019 Rugby World Cup quarter-finals, but they will want to set a winning tone in Friday’s clash with Georgia.

Wales’ win over Fiji during the week guaranteed they and the Wallabies would finish as the top two teams in Pool D, with the Welsh now only needing to beat bottom-placed Uruguay to seal first place.

That means Michael Cheika’s men will most likely face England in the knockout rounds, as the Brits have already secured top spot in Pool C.

With such a tough task on the horizon, the Aussies cannot afford to let their standards slip in their final game of the pool stage.

Georgia might be making up the numbers now, but they will be determined to give a good account of themselves and exit the tournament on a high note.

It was thought the Wallabies would field something like their strongest team with the quarter-finals looming, but instead they have shuffled the deck again. Matt To’omua becomes Australia’s third fly-half of the tournament after stating at inside centre against Uruguay, while rising star Jordan Petaia retains his spot on the wing.

As expected, the Georgians have named a big, strong team with the intention of battering their way into the contest. Gela Aprasidze replaces Vasil Lobzhanidze at scrum-half and Beka Saginadze comes in for Giorgi Tkhilaishvili at blindside flanker, with Lobzhanidze and Tkhilaishvili both joining the bench.

Kurtley Beale anytime tryscorer – $1.90 at Bet365
The Wallabies are favoured to win by a hefty margin, which means we can expect the backs to pepper the line all night. Most online bookmakers have Beale at short odds to get on the score sheet, so anything in the vicinity of even money for anytime tryscorer is great value.

More tries in second half – $1.83 at Sportsbet
In one-sided contests like this, it is often the case that the underdogs give their all to keep it tight early but then fade as the game goes on. The favourites also have a tendency to take their foot off the gas late in the game, so expect a looser, more open second half.

Australia to win by 13+ points – $1.25 at Ladbrokes
The question is not whether the Aussies will win, but by how much. Their previous two games as favourites resulted in a 39-21 result against Fiji and a routine 45-10 win over Uruguay, so they should have absolutely no issue racking up a margin of 13 points or more against Georgia.