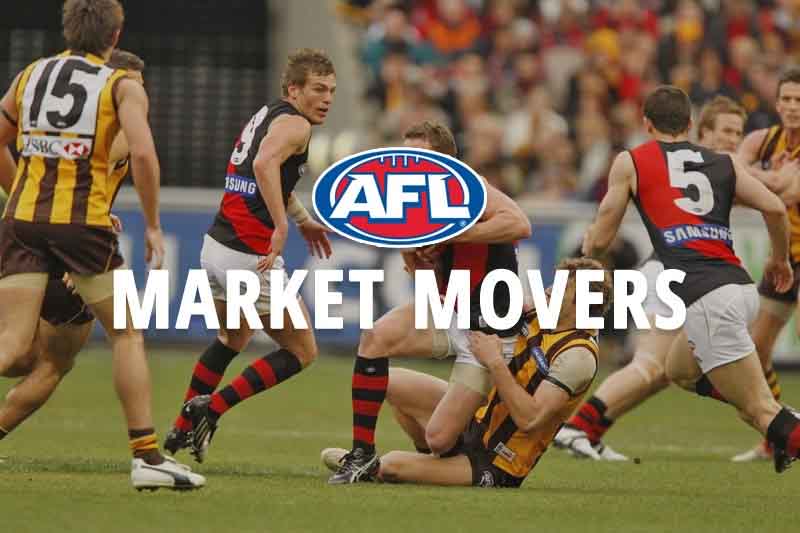 Round 6 of the AFL season runs from Wednesday to Sunday this week, and if the betting odds are any indication, anything could happen. We examine the AFL odds prior to round 6, plus take a look at the updated 2019 Premiership market.

The round will begin on Wednesday night, when under fire Melbourne, sitting in 17th position on the ladder, take on Richmond, which has regrouped after the horror season-ending injury to Alex Rance and key injuries to skipper Trent Cotchin and forward Jack Riewoldt. The Tigers are $1.43 to win the clash, with the Demons priced as rank $2.70 outsiders.

On ANZAC Day, Collingwood will look to continue its promising form when it clashes with the resurgent Essendon, buoyed by the return of star big man Joe Daniher. The Magpies are $1.46 to defeat the Bombers ($2.58) in the traditional MCG clash.

Port Adelaide ($1.28) is unbackable favourite for their clash against North Melbourne ($3.45) from Adelaide on Saturday night. The Power stunned West Coast over the weekend, causing a massive boilover in the West and they look too good on paper against the Roos, who are languishing in last place, with just one win.

Brisbane will start $1.41 favourite in the Q Clash against Gold Coast on Saturday night. The two Queensland teams’ form has been patchy, despite showing plenty of improvement, with this clash genuinely a flip of the coin. This, however, is why the $2.75 on offer on the Gold Coast looks generous.

Remarkably St Kilda will start $1.74 against Adelaide ($2) in their clash from Marvel Stadium. The Saints are the surprise packets of 2019 and will be chock full of confidence after their energetic win over Melbourne on Sunday.

GWS will be looking to get its season back on track against the Sydney Swans when the Battle of the Bridge takes place on Sunday. The Giants have been installed at $1.44 with the bookies, while the Swans are paying $2.67 for the win.

Fremantle, still high after beating GWS on Sunday, will fancy itself against the Western Bulldogs. The Dockers are $1.41 favourite to win this match against the Dogs, who are priced at $2.78 following their shock loss to the Blues on the weekend.

On Sunday, Hawthorn is paying $1.22 to defeat Carlton ($3.96) with the odds in this clash suggesting a one-sided contest. We urge you to look closely at the markets surrounding this match, because the Hawks and Blues result is no foregone conclusion.

The final AFL round 6 odds we will discuss is the clash between Geelong and West Coast from Geelong on Sunday afternoon. The Cats are $1.49 favourite in this match against the reigning premier which is paying $2.50. The Eagles were smashed at home by an impressive Power outfit on Friday night, while the Cats took on the Hawks in the traditional Easter Monday clash.

AFL Premiership Odds – Prior to round 6

Collingwood has moved into outright AFL Premiership favouritism following its blitzing of Brisbane from the GABBA on Thursday night. The Pies are $4.70 to win the flag and go one better than their grand final appearance last year. Geelong ($5.50), West Coast ($6) and Richmond and GWS (both $7) round out the main Premiership contenders. 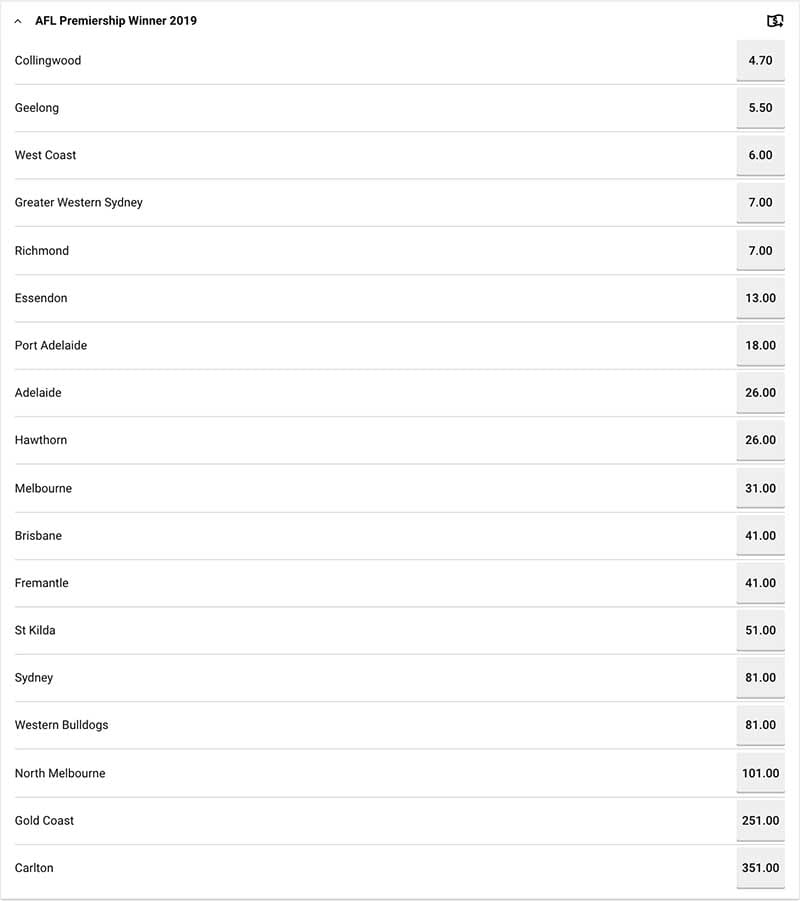 All AFL odds were correct at the time of publishing on Monday, April 22, 2019. They were taken from Sportsbet.com.au