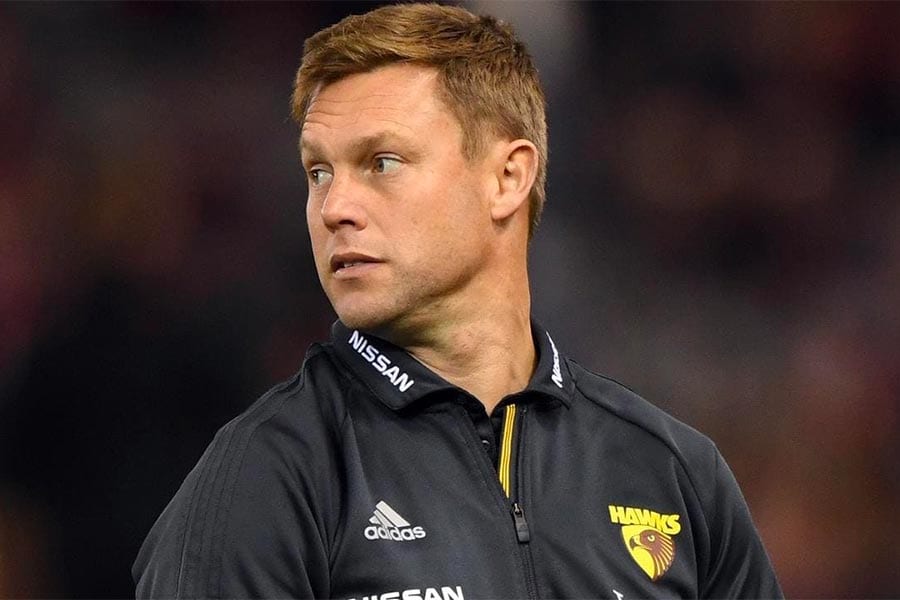 Hawthorn on Tuesday announced a coaching succession plan that will see Sam Mitchell take over from Alastair Clarkson at the end of the 2022 AFL season.

Mitchell is a Hawks legend who played 307 games and captained the club for three years, which included the famous 2008 campaign resulting in the first of Hawthorn’s four premierships.

Clarkson has coached the Hawks since 2005, winning four AFL Grand Finals during his time at the helm, but the club has made the decision to not renew his contract beyond 2022.

The setup for the 2022 season will be very similar to this year for the Hawks, as Mitchell will continue as the head coach of Box Hill instead of moving into an assistant coaching role with the seniors.

Hawthorn president Jeff Kennett stated just last month that they were not going to rush any decisions regarding who will coach the club in the future, although he later admitted Collingwood’s decision to part ways with Nathan Buckley did force their hand.

Mitchell’s situation closely mirrors what the Magpies went through back in 2009, when North Melbourne tried to lure Buckley away from the Pies to coach at Arden Street.

This resulted in the Magpies quickly announcing Buckley would succeed Mick Malthouse at the end of 2011, even though Malthouse had made two consecutive grand finals.

Clarkson will step away from the Hawks after his 18th season in charge, which comes at an interesting time if he still has intentions of coaching in the future.

Four current AFL coaches will be out of contract at the end of 2022, including David Teague (Carlton), Stuart Dew (Gold Coast), Brett Ratten (St Kilda) and Simon Goodwin (Melbourne), who all could be in trouble if Clarkson still has the passion to coach.

The news out of Hawthorn has caused Sportsbet to suspend betting on the next Collingwood coach, as both Mitchell and Clarkson were among the top candidates for the vacant seat at the Pies.