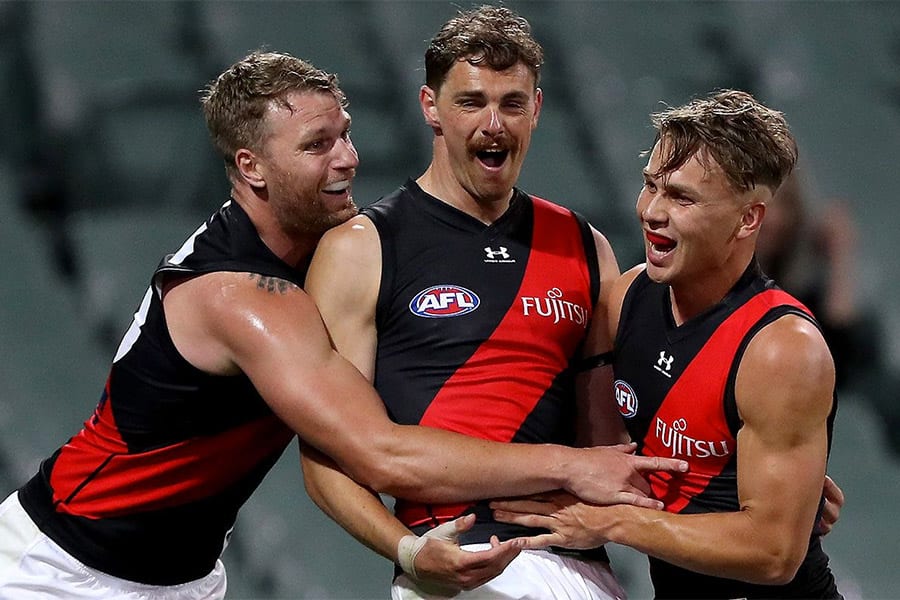 The second Football Frenzy of the 2020 AFL season started off with a bang and continued to surprise us with cracking contests and plenty of individual brilliance. Here are the biggest stories to come out of round 14.

Historic comebacks for Essendon and Geelong

If you’re a Hawthorn or Western Bulldogs supporter, look away now.

After a dismal two quarters that had fans and pundits fuming, the Essendon Bombers went into half time on Thursday night trailing the Hawks by a seemingly insurmountable 36 points.

But the Dons came out breathing fire in the second half and kicked 11 goals to three, thus clinching an important victory that places them one win outside the top eight with a game in hand.

It was a similar story for the Geelong Cats on Friday night, as they conceded the first six goals of their game against the Bulldogs.

But Luke Beveridge’s men fell asleep and allowed the Cats to kick 10 goals to their three in the remaining three quarters, with Gary Rohan grabbing two crucial majors in the final term.

Geelong sat atop the AFL ladder for the night until Port Adelaide reclaimed its spot the next day, while the Bulldogs dropped outside the eight and have the bye in round 15.

Did the Saints kick themselves out of finals?

Life has been confusing for St Kilda Saints fans in 2020, as the club has taken some big scalps while dropping winnable games by slender margins.

The Melbourne Demons were slight outsiders against the Saints last Saturday, but they came away with the four points in the closest game of the round.

St Kilda has lost two straight matches by less than a goal, and it could well cost the team a place in the AFL 2020 finals.

With the Demons and GWS Giants nipping at their ankles, the Saints need to win all their remaining games to make sure of a place in the top eight.

We cannot help but cast our memory back to round one in March, when the Saints blew a 30-point lead against North Melbourne and lost by two points.

Daniher back with a bang as key forwards stand tall

Much of the recent talk around key forwards has centred on Tom Hawkins and Josh Kennedy, but some big names in other teams stepped up over the weekend.

Joe Daniher made a huge impact in his first game for more than a year, ending the night with three goals, 10 marks and the four premiership points.

It was hard to split who was best afield for Port Adelaide against the Swans, as Robbie Gray starred with 27 touches and two goals, but big Charlie Dixon put through one of the goals of the year and ended the day with four majors.

Dixon needs to be fired up in the next few weeks if the Power are to have any chance of winning the 2020 AFL Grand Final, as the key forward is the main barometer for Port Adelaide.

Collingwood and Richmond refuse to lie down

Despite some trials and tribulations this year, two Victorian giants have started to put together some promising results in the lead up to the finals.

Not only have the Richmond Tigers stayed alive through injuries and absentees, they’re the newest premiership favourites after beating the West Coast Eagles by 27 points.

Punters were happy to take Carlton as $2 outsiders against the Collingwood Magpies, but a strong defensive effort in the second half saw Nathan Buckley’s men claim their fourth win in the last five games.

The Tigers have all but locked in another finals campaign, but the Pies still have some work to do with games against the Brisbane Lions, Gold Coast Suns and Port Adelaide to come.