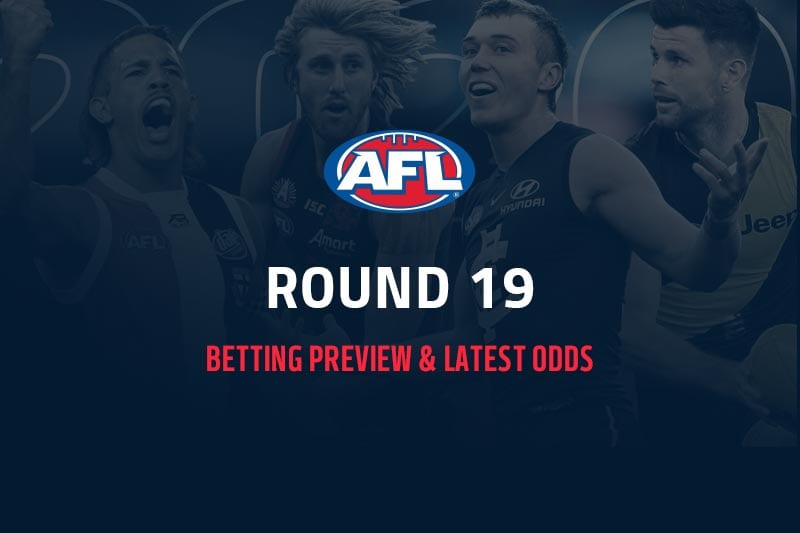 The AFL has worked tirelessly to ensure the 2021 season remains on track despite nationwide struggles with COVID-19 restrictions. Here is a look at all the matchups and odds for round 19 as well as a premiership market update courtesy of Sportsbet.

The Magpies were set to undergo their second fly-in, fly-out operation in South Australia this Friday night, but the state’s snap lockdown means the clash with the Power will need to be rescheduled. Collingwood has been unpredictable this season, while Port Adelaide has consistently beaten teams outside the top eight. Ken Hinkley’s men escaped with a one-point victory over the Pies back in round 10, but online bookmakers are expecting a bigger win to the Power this time around.

If everything falls into place for the Blues, there is still a slight chance they can finish inside the top eight. The Kangaroos have played well over the last month, but it will take a strong effort to knock off Carlton this Saturday. A well-rested Patrick Cripps should return to help the Blues take on the Roos this weekend.

The Gold Coast Suns will have a shot at redemption this weekend when they face the Brisbane Lions at the Gabba. This week’s Q Clash was pushed forward from round 20 to help balance the reshuffled AFL fixture. The Lions have lost their last two matches, while Lachie Neale could miss this clash with a shoulder injury which he suffered midweek at training.

A spot in the top eight is on the line for both the Eagles and Saints this Saturday afternoon. West Coast snapped its three-game losing streak with a much-needed win against the Crows in Adelaide last week, while St Kilda blew a golden opportunity against the Power to win a fourth consecutive match. The money favours the Eagles, yet we feel the Saints could pull off an upset.

Although the Crows and Hawks are not playing for a spot in the finals this year, we think their clash at the Adelaide Oval this Saturday night will be a belter. Matthew Nicks’ men have lost their last four matches, while Hawthorn managed a draw against the ladder-leading Demons. Will the Crows hold off the Hawks this weekend, or will they drop even lower down the ladder?

If you could only watch one game in round 19, this blockbuster is the obvious choice as the Melbourne Demons and the Western Bulldogs do battle for top spot on the AFL ladder this Saturday night at the MCG. The Dees comfortably beat the Dogs back in round 11, but their form is not spectacular heading into this clash. We expect both teams will bring their A-game in what should be an enthralling contest.

The AFL is still organising when and where the Bombers and Giants will clash this weekend, but we expect it to be a Sunday night affair at Metricon Stadium. The Giants gave away a six-goal lead to the Swans in round 18, completely running out of gas after half-time. The Dons did enough to defeat the Kangaroos last weekend, but can they knock off GWS and keep their spot in the top eight?

Sunday’s early game at Metricon Stadium looms as an important one for Fremantle. The Dockers have every intention of playing in September this year, but they will need to pinch a few upsets during their run home. The Swans played like men possessed after half-time last week, and they will be looking to ride that wave of momentum into round 19.

Last year’s grand finalists will face off at an empty MCG this Sunday as Geelong plays host to Richmond. The Cats requested a location change to GMHBA Stadium, but the AFL denied the move despite the absence of crowds in Victoria at the moment. The Tigers will be vulnerable this week given their growing injury list, which could result in a big victory to the clinical Cats.

There has been plenty of movement at the top end of the 2021 AFL Premiership betting market this week, starting off with the Cats jumping into equal-favouritism with the Western Bulldogs at $4.50. Both the Demons ($5.50) and the Lions ($6.50) slipped back slightly after failing to secure wins in round 18. The Power ($8) and the Swans ($10) are also around the mark, while there is still a hint of interest in Richmond at $15 despite Dustin Martin’s season-ending injury.