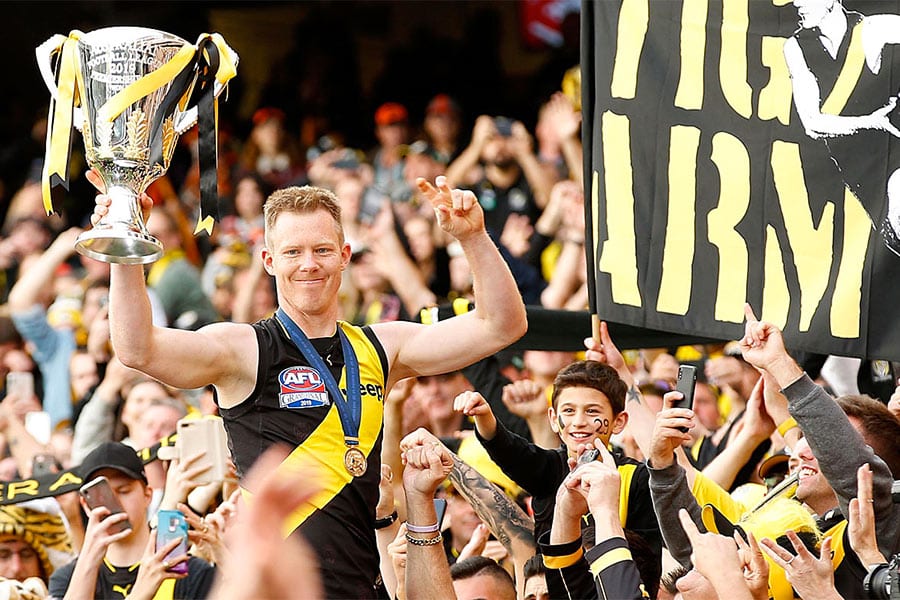 The 2020 AFL Premiership season will be the most unique we have ever seen, but that doesn’t take away any incentive for clubs to win the flag.

With the fixture for the next few rounds sorted, online bookmakers are once again taking bets on the premiership, the Brownlow Medal and many more AFL futures markets.

Based on past results, betting activity and the shape of the draw, these are a six standout teams in this year’s AFL Premiership race.

It should surprise nobody that the 2019 premiers remain the favourites for the following season, as the Richmond Tigers have barely changed their winning squad.

The blueprints that won the Tigers their 2017 and 2019 flags will be used again this season, revolving around quick ball movement and intense pressure in the forward half.

Small forwards have become the most dangerous players on the list for Richmond, with Jason Castagna, Shai Bolton and Daniel Rioli all kicking three goals in round one.

With Dustin Martin still able to tear teams apart and Tom Lynch standing as a dominant forward target, the Tigers simply need to keep doing what they have been doing for the last three seasons.

We like the option of Lynch to win the Coleman Medal, as he should be even more comfortable in the Tigers’ system during his second season at Punt Road.

Teams from Western Australia have always had a certain resilience due to their extreme amount of travel, which gives us great confidence in the Eagles during these tough times.

Both West Coast and Fremantle will need to hub on the Gold Coast while awaiting a WA government exemption that would allow them to travel without needing to quarantine for 14 days.

Despite being stuck on the wrong coast to start their season, we see the Eagles as a long-term option that could pay off in the latter half of the season.

Andrew Gaff now has a perfect foil in Tim Kelly, who has the ability to give him a chop-out on the wing or win the ball on the inside if needed.

Nic Naitanui will be ready to go from the first week back and may well come into All-Australian contention if he stays fit.

The defensive structure that won the 2018 flag still remains healthy and powerful, so you can never count out the West Coast Eagles.

West Coast to win the premiership

Watching the Magpies play against the Western Bulldogs round one was interesting, as they won with ease despite missing a few key players.

Collingwood went within a whisker of ultimate glory in 2018 and reached the preliminary finals again last year, but how much longer can they keep that premiership window propped open?

We think 2020 is the year of the Magpie. Scott Pendlebury is still a superstar, Brodie Grundy gets better ever year, Adam Treloar is one of the league’s best runners and Jordan De Goey is unstoppable at his best.

The depth across the entire ground has never been better for the Pies, who are decent value to make the top four at $2.37 with Sportsbet.

If you are looking for talent, the GWS Giants have had the most gifted list in the competition for what feels like forever.

Every season a few star players leave GWS to pursue careers elsewhere, but the draft picks keep accumulating and the stars keep popping up again.

This year will be no different, as the Giants are determined to go one better than their 2019 AFL Grand Final loss.

Jeremy Cameron won the 2019 Coleman Medal and, in the prime of his career, is going to be hard to stop again this season.

Experienced recruit Sam Jacobs could prove crucial in the ruck late in the year as the Giants chase their first-ever flag.

Bowing out of last year’s finals in straight sets has left the Brisbane Lions more eager to return than any other club.

Losing to Hawthorn badly in round one wasn’t ideal, but the Lions will look to move past that with one of the easiest fixtures to restart the 2020 AFL Premiership season.

Lachie Neale and the exciting Hugh McCluggage will be an excellent duo in the midfield for Brissy, while fans will hope to see some big strides from the 2018 no.1 draft pick, Cameron Rayner.

Harris Andrews is among the favourites for the All-Australian full-back role and Charlie Cameron thinks he has a shot at the Coleman after booting 57 goals last year.

The Lions have talented players around the ground and will be hard to stop at The Gabba, meaning they will be in a position to attack the finals again this year.

Chris Scott has found a way to stay relevant in every season he coaches the Cats, and this year is no different.

This might be the last time we see Garry Ablett Jr in the AFL, sparking now-or-never conversations in the media about Geelong’s flag hopes.

Patrick Dangerfield is still going to be one of the most popular options on Brownlow night, but the loss of Tim Kelly could hurt the Cats’ midfield depth.

Bringing in Jack Steven appeared to be a very clever move, but the former Saint’s prospects are in serious doubt due to his well-documented lockdown drama.

The key for Geelong will be whether Esava Ratugolea is ready to take the next step and become a ruck option, as the ruck stocks have always been low at Kardinia Park.