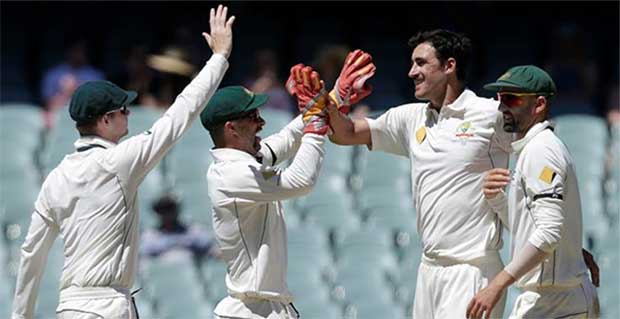 WHAT a difference a week can make.

The Australian cricket team was in utter shambles after losing the Hobart Test – its fifth consecutive defeat in the long form of the game.

Now, after salvaging some pride with a convincing seven-wicket victory over South Africa in Adelaide, there is an almost-unbelievable sense of optimism about the future.

The fresh faces seem to have had an immediate rejuvenating effect on the squad, with Peter Handscomb making an especially-big impression on debut both at the crease and in the field.

There was also plenty to like about young Matt Renshaw, who showed the kind of fighting character that Australia’s batting order has lacked in recent times.

The upcoming Chappell-Hadlee Trophy series against New Zealand – starting Sunday, December 4 in Sydney – will see another fresh face added to the mix at the expense of some older stock.

Hilton Cartwright, a 24-year-old allrounder from Western Australia, will vie for a spot in the middle order after an impressive start to the Sheffield Shield season.

Pat Cummins, Mitchell Marsh and Glenn Maxwell will don the green and gold pyjamas once again, but there is no place for John Hastings – one of Australia’s most consistent performers in ODI cricket over the past 12 months.

With the likes of Josh Hazlewood, Mitchell Starc and captain Steve Smith carrying good form in from Adelaide, punters have backed the Aussies into $1.36 at Sportsbet to win the series.

The fitness management of big quicks Hazlewood and Starc continues to draw comment – much to the chagrin of Australia head coach Darren Lehmann.

“We gave them a break [for the ODIs in South Africa] didn’t we?” he said in a rather brusque press conference after the Adelaide Test.

“So they should get through the summer. But we got in trouble for that as well.

Lehmann had a similar response to concerns over the decision to wedge a three-match ODI stint in between the South Africa series and the upcoming Brisbane Test against Pakistan, which starts December 15.

“Can’t do anything about it,” he said.

There were whispers that David Warner might sit out the limited-overs games after battling through a sore shoulder in Adelaide, but the vice-captain is expected to play through the pain.

The Aussies lost all five of their One Day Internationals in South Africa, so their form in the coloured clothes is hardly any better than their touch in the whites.

Yet the ODI champions are always hard to beat on home soil, and much of the team that took out the 2015 Cricket World Cup remains.

Hazlewood, Maxwell, Smith, Starc, James Faulkner, Aaron Finch and David Warner all featured against the Kiwis in the MCG final, while Cummins and George Bailey were also part of the squad.

New Zealand had some excellent moments on its recent tour of India, although they were made to look silly in game five when they were skittled for 79 while chasing 270.

Even without the retired Brendon McCullum, the Black Caps are capable of putting on a really good show when things click.

There should be plenty of decent cricket, but Australia – however rough the past few months have been – are rightful favourites.

It’s the usual candidates in the ODI cricket futures betting, with Smith and Warner the $2.75 favourites at Sportsbet to top the runscoring charts for Australia.

Kane Williamson ($2.25) is at even shorter odds to rack up the most series runs for the visitors, ahead of openers Martin Guptill ($3) and Tom Latham ($4).

Trent Boult and Tim Southee (both $3) are the obvious choices in the NZ bowling futures, while Starc is well in the clear at $2.87 to claim the most Kiwi scalps.

All markets provided by Sportsbet.com.au