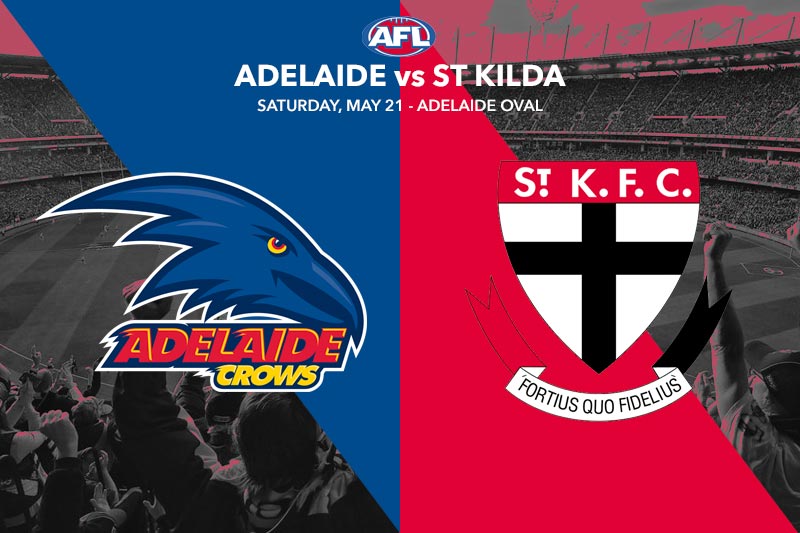 The Adelaide Crows will be out to cause an upset when they face the in-form St Kilda Saints at Adelaide Oval this Saturday night in round 10 of 2022 AFL season.

Although the Crows have lost their last three matches, they might fancy their chances this weekend given they beat the Saints last season.

The loss was a big blunder from the Saints against a bottom-four side, as they were pushing for the finals and eventually missed out by one win.

This week’s match will be a slightly different one for both teams, as neither side will line up with their captains.

Rory Sloane has been watching on with a knee injury for a few weeks, while St Kilda skipper Jack Steele will take his first break from playing this weekend after undergoing shoulder surgery.

Neither side is at full strength, but you can still be assured they will provide another great contest to follow up their thrilling bout from 2021.

Two old teammates will face off in the midfield this week as Brad Crouch returns to Adelaide Oval to face Rory Laird and the Crows. Crouch is averaging 28 disposals per game, making him the best accumulator for the Saints. Laird is in career-best form in the midfield with a very handy average of 32 disposals per game, which currently ranks fourth in the AFL behind just Darcy Parish, Bailey Smith and Clayton Oliver. Both players can rack up the footy, and we think they will both perform well this Saturday night.

We are finding it hard to get a read on St Kilda. The Saints were poor against Port Adelaide and Melbourne, but they were fantastic against Geelong last week. We think the Saints thrive on momentum and will start this week strong after they kicked nine second-half goals against the usually stingy Cats. The Crows have been decent this season, so they should keep the margin close this weekend.

Although he kicked 1.4 last weekend against the Lions, we are backing in Taylor Walker to bring his kicking boots against St Kilda this Saturday night. Walker is averaging just under three goals per game this season and could have kicked many more if not for his unselfishness in front of goal. The former Crows skipper has been massive at Adelaide Oval in recent times and should lead the way for the Crows on this occasion.

Brad Crouch is in for a massive match in the midfield against his old mates, and that might just be enough to help St Kilda get over the line against the Crows. Tex Walker will put through at least three goals in a valiant effort up forward, but it will not be enough to stop the rampaging Saints.